Lisa L Hannett is quirky, highly talented, and living in Adelaide -- city of churches, bizarre murders and pie floaters -- so you know she knows all about suffering for your art. Her short stories have been published in venues including Clarkesworld Magazine, Fantasy Magazine, Weird Tales, ChiZine, Shimmer, Electric Velocipede, Tesseracts 14, and Ann & Jeff VanderMeer’s Steampunk II: Steampunk Reloaded, and she provided a creepy-as-all-fuck little gem for my issue of Midnight Echo to boot. The February Dragon, co-authored with upcoming carrotter Angela Slatter, won the 'Best Fantasy' Aurealis Award in 2010, so you know she's got chops. Her first collection of short stories, Bluegrass Symphony, was published by Ticonderoga Publications in 2011. Midnight and Moonshine, a second collection co-authored with Angela Slatter, will be published in 2012. You can find her online at http://lisahannett.com. 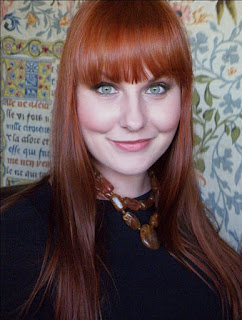 Yes! Yes and yes and yes. I write poetry & prose, and draw. The link between all 3 is the image, the image I strive to express through the different mediums: 2 with words & one with line and shadow play. Writing is an art to express the inexpressible, visualise the invisible, make tactile the untouchable. To bring into being a world that is not there in the mind of the reader is an art contiguous with those of the illusionist, the hypnotist and the real, out-and-out magician/sorcer/wizard. Not for nothing were ballads so long ago regarded as a form of magic. Now, all is undercut by management-speak, weasel words & the apparent desire to reduce all to the lowest common denominator.