THUMBNAIL THURSDAY PUTS ON A SHOW! 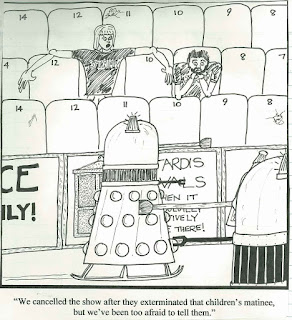 One that not only made it to ink stage, but actually saw publication. In a newsletter I was editing, but they all count, right? Right?

Anyway. Daleks. On Ice. Comedy fucking gold. I actually wanted to call a revue I put together in my comedy days "Daleks on Ice", but was voted down by the other players. "Not Without My Cheesecake, You Don't" was the result, a title that sucked as badly as the show.

I like cartooning, and writing. you don't have to work with idiots.

THUMBNAIL THURSDAY HITS THE BOTTOM OF THE BARREL AND JUST KEEPS ON DIGGING.

"Yes, Mrs Tompkins, we do occasionally use the term 'gifted'. But in this case, I'm afraid
young Nigel is simply weird.


Yeah, nothing to see here. Move along.
Posted by Unknown at 7:00 am No comments: 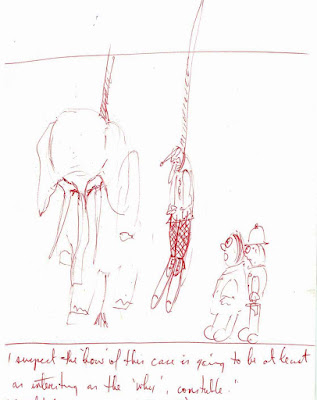 "I suspect the 'how' of this case is going to be at least as interesting as the 'why', constable."

Elephants have been convicted of murder: witness the case of Mary, a circus elephant hanged-- yup, hanged-- in 1916 after being found guilty of murdering her trainer.

There is nothing so black that humans can't find humour in it. Or do it for real. Because, generally, we suck.

I AM TOO SOCIAL BY HALF, AND NOT IN THE RIGHT WAYS

July is always a strange month. For me, it's the first month of the year: my day job is based around an annual budget that is approved in June and runs from financial year to financial year, so my programs and projects run along similar lines, meaning my work year coincides with the financial year. July is a time of renewal, of long-term planning, and new beginnings. And my Real Life (tm) is beginning to take on that cycle. July is where I look at the year ahead, and institute changes that I hope will carry throughout the rest of the year.

Of course, I do that in January, too, but that's because I'm insecure and a whiner.

My first change this month has been to abandon Facebook, and boy, are my arms tired... Not entirely, as it turns out, because many of the fan groups I'm a part of exist only on the wide blue lifewaster, and I have a public author page that it's nice to update occasionally. But I've moved away from my private page for the month: I'm reading my news feed once every three days instead of six time a day; I'm not commenting on anything-- some very particular posts, and groups, excepted; and I'm just generally ignoring its existence as much as possible. And, surprisingly, I'm immediately happier. It's amazing what a sinkhole of whine and angst Facebook is, without anyone really being aware of it. It changes people, myself very much included, and like any obsessive death cult, you kind of have to escape it to notice. Half a month in, I'm noticing, and giving serious consideration to extending my self-imposed exile through August and beyond. I wonder if I can cut down my reading to once a week.

The other thing I've enjoyed is a return to writing. The kids have been at their grandparents' this last week as part of their school holidays, and without having to centre our daily life around them Luscious and I were able to wander up to the City this past weekend and partake of the fortnightly writing group put together by Perth SF author Martin Livings. This group meets at either Edith Cowan University or the State Library for lunch, before an extended writing session and a debrief in a cafe afterwards, and lugging two pre-teen kids along is really not achievable.

But Saturday, I was able to slip my headphones on and concentrate on the screen for Three. Solid. Uninterrupted. Actual. HOURS. And in three hours, I can knock out two 1500 word synopses for novels requested by my publisher. One in particular-- Cirque, a novel about a girl who runs away to join an alien circus-- has been kicking around in my skull for ages. I have 15,000 words written, so by the end of the weekend I was able to complete the synopsis, organise the 15k into sections matching the action arcs in the synopsis, and determine what I need t fill in so that by the end of this week, hopefully, I can have the completed synopsis and a three chapter package in my publisher's inbox, where naturally they will pick it up, publish it in every country on Earth, and make me rich and famous enough that I never have to speak to anybody ever again. Or something.

And that's the change, kiddos: a year ago I was immersed in social media. I had accounts on 9 platforms at one stage. Now I'm down to 2, and am all but abandoning one of those. (The blog stays). I was at my happiest, as a writer, when it was just me, Luscious and the kids, my blog and the writing. I'm not sure why I ever strayed from that, but I think it's time I went back to what makes me happy. And if you like my writing, hopefully that'll make you happy, too.

Posted by Unknown at 6:07 pm No comments:

THUMBNAIL THURSDAY IS ON THE 'B' ARK 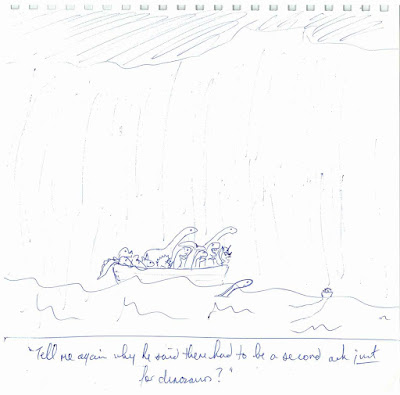 "Tell me again why he said there had to be a second ark just for dinosaurs?"

An old gag retold. Let's say I did it for the practice and never speak of it again. 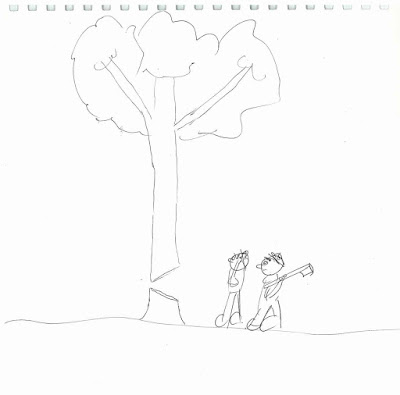 Simple and silent. Sometimes you don't have to go any further than whimsy.

Labels: Thumbnail Thursday
Newer Posts Older Posts Home
Subscribe to: Posts (Atom)
Would you believe he came out well
He had a bright inquiring mind
His family knew that he'd go far
If he applied his time
But he started out standing on corners
And talking out loud, too loud
You see he couldn't believe in himself or the world
Or anything he heard