Only 8 days until I jet off to Brisbane, and a bunch of appearances at this year's Brisbane Writers Festival. I'll be appearing across both open and kids' 'Word Play' programs, as well as presenting a short fiction Masterclass, so I'll be plenty busy. Catch me here, if you're so inclined:

Writing exercises for kids to explore the bumps in the night and get them down on the page. Book here.

Online
2.00pm
Wednesday 7 September
This is an online session: if you're interested in registering, you can find more information here.

The Edge, State Library of Queensland
9.45am
Thursday 8 September

A three hour masterclass on the art of writing short fiction, featuring such necessities as Unicorn Physics, Reversing the Polarity, and Battersby's One-Size-Fits-All Guide to Destroying a Made-Up Person's Life.

with David Burton, Amie Kaufman and Jaclyn Moriarty. We talk apocalypses, survival, and just what we'd pack in our backpack on the day.

And that's it: I'm on the plane back to Perth first thing Sunday morning, so catch me as catch can.

Bricktober is six weeks away, and I'm slowly getting my act in place and piecing together my display for this year. 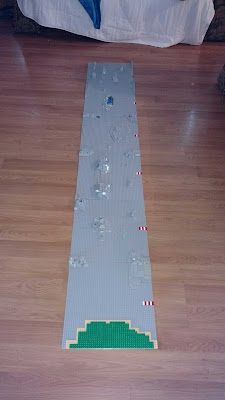 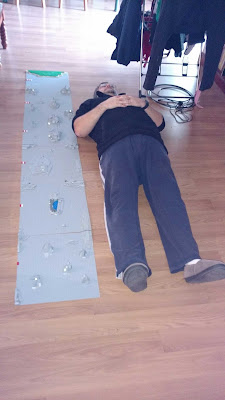 This year's promising to be even bigger and better than 2015, so come on down to the Canning Showground and have a fun day for the price of... well, something not very expensive at all.

You'll find all the details under the poster: 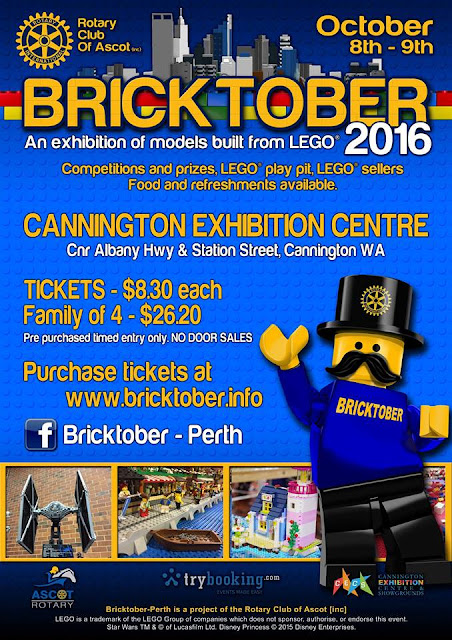 Posted by Unknown at 9:08 am No comments:

Last week, Luscious, the kids, and I met up with our good friends Kris and Kim, and moseyed on up to the Katharine Susannah Prichard Writers Centre for their spooky night of ghost stories. Lyn and I had entered stories in their ghost competition, and had been informed that we had both been shortlisted and would we like to come along and read? Of course we would. The KSP is one of the loveliest and most atmospheric Writers Centres I've ever seen, and it's always a real pleasure to head up there. So we hooked up with Kris and Kim for dinner in Midland, paused to let Master 11 get into costume (prizes for dress-ups!), and toddled off, stories in hand. 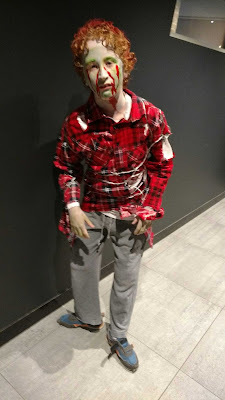 
And, well, we did all right. A prize for Master 11 for his zombification, the announcement of Luscious' brilliant story Cross Words as the second prize winning story, and then -- after clearing the room of under 18s and telling everyone that the organisers had been forced to refine the running order of the evening specifically because of the graphic nature of the winning story-- my own tale, The House of Jack's Girls, a lyrical little thing about men bringing their sons to a haunted brothel specifically to have sex with Jack the Ripper's victims, was announced as the 1st prize winner. 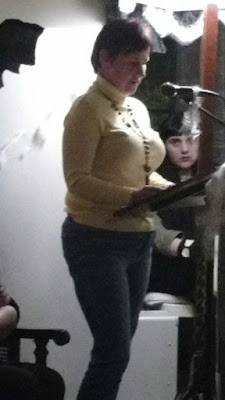 Lyn silenced the room with her reading of her tragic and powerful story.


A good night for the ego, and a good night for the sense of fun. KSP organiser Tabetha was overwhelmed by the sheer weight of attendees, so here's hoping it makes a reappearance again next year. You can read all about the night, including judge's reports, from the KSP perspective here. 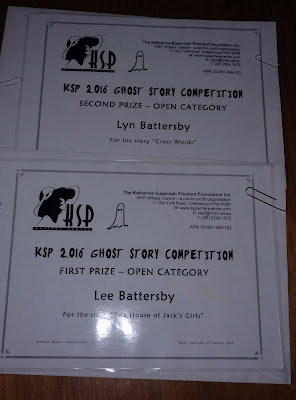 Tomorrow night, Luscious and I will be up at the Katharine Susannah Prichard Writers Centre, scoffing curry puffs and drinking hot chocolate -- and incidentally, reading fresh new works -- as part of the KSP's Spooky Stories Night. It's a fundraiser for the KSPs residency program, and both Lyn and I have been shortlisted in their ghost story competition. I'll be reading my entry, The House of Jack's Girls, and I will say that it's one of the harder-edged horror stories I've written in a little while: if you've fond memories of my Aurealis-award winner Pater Familias from a few years back, well, it's in that sort of territory-- the kids will be sent to another room while I'm reading....


Winners of the competition will be announced, there' a dress-up competition, warm food, marshmallows for toasting over a fire, and if you've got a scary story to tell, a chance to scare the bejeebus out of everyone in the best possible setting.


Tickets are cheap as chips, and it's shaping up to be a fun old night, so come on down. You can find more details here.

Two months since my last post. All of June and July, and not a peep.

Yeah, there's a reason for that.

Suffice to say, things did not go well for a while. It's a little vaguebooky, but I'll talk more about it in later posts.

For now, here I am, on the last day of a two week break away from the world, where all I've done is lie in bed, watch a lot of Top Gear, get addicted to Pokemon Go, and noodle about with a Powerpoint for my upcoming appearance at the Brisbane Writers Festival in September.

I'll be playing about in the kids stream with a presentation called Let's Get Spooky, all about how to write shivering stories for kids. And I'll be knuckling 20 or so writers under my lash in a short fiction Masterclass as part of the main program, to boot. Head on over to the BWF website to see the full program.

I've also managed to successfully apply for a writing residency in 2017. The organisation has not yet announced it, so I'll stay schtum on the who, where and when for the moment, but expect some announcements semi-soon.

And I'll also be crawling out from under my bed in early October to display some of my Lego creations at this year's Bricktober. Once again, it will be at the Canning Showgrounds, and promises to be an absolutely fantastic day out. I'll be displaying more of my spaceshippy goodness, as well as coordinating a table dedicated to a Micropolis group build. Once again, more details as we get closer.

So, for the moment, here I am: still swimming (just), still keeping my head above water (just), still getting involved (double just with chips). Luscious and I have had some big (tm) conversations recently, and we will be making some enormous life changes over the next 18 months. I'll be talking about them as they arrive, but for now, this much contact is just enough.

Labels: Lego, Real Life (TM), writers festival, writing
Newer Posts Older Posts Home
Subscribe to: Posts (Atom)
Would you believe he came out well
He had a bright inquiring mind
His family knew that he'd go far
If he applied his time
But he started out standing on corners
And talking out loud, too loud
You see he couldn't believe in himself or the world
Or anything he heard