It's not always about the writing, you know.

This Sunday, I'll be staffing a table at the annual AMRA Model Train Show at the Claremont Showgrounds. No, I haven't added model trains to my list of hobbies that wouldn't get me kissed by a girl if I was single. Rather, I'm volunteering on behalf of Bricktober, the Lego show I participate in each October, who have a display table at the event for the first time.

Normally, I head down there to see the display by the WA Brick Society, which I have a habit of reporting on each year, but this time, I'll be making with the niceness and the being nice shtick, nicely. Which is why I'm only doing one day instead of the whole three, because come on: who can keep that up for a whole three days?

So come on down, have a gander at the amazing displays on offer-- and even as a non-train-lover, they are amazing-- and say hi to the Bricktober table while you're down there! 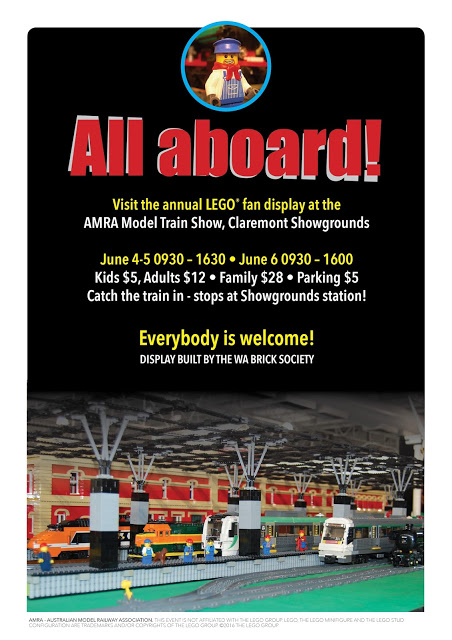 Posted by Unknown at 7:26 am No comments:

TRUMBO AND THE TRUTH IN BLOGGING: OVER TO YOU, PEEPS

Spent last night watching the dramatised documentary Trumbo, which is based, to a large extent, upon letters written by Dalton Trumbo during the period of his blacklisting. One thing that really shone through was just how literate, wide-ranging and incisive those letters were, and it got me thinking: letters are verging upon being a dead art form, now. They've been replaced by emails, and to a certain extent, weblogs. We've replaced lyricism with functionality.
As for blogging, it's a form I've never used as a true record of my thoughts: I've dabbled with it, been flippant and irregular. As a journal-- as a snapshot of my thoughts, attitudes, and experiences-- it's not been up to scratch for a rather long time.
So, here's a chance to change that. Post a subject below that you'd like to see me discuss, address, or just generally rant about. Once a week, until the subjects run out, I'll dedicate a blog entry to it. I won't lie, or prevaricate, or treat it lightly. I'll give you utter and unalloyed honesty and truth.
What would you like me to talk about?
Posted by Unknown at 12:53 pm No comments:

A CLASSIC, YOU SAY?

Thanks to the lovely Kylie Ding, here's the full text of The Times' review of Magrit.

It's as spoileriffic as all buggery, but how's about that last line?

I SHALL WRITE TO THE TIMES ABOUT THIS!

Maybe it's the English-Boy upbringing, but there are some images and icons that stand above others as some sort of acknowledgment of hasn't-he-done-well?-ishness.

Running out onto Wembley for the FA Cup final.
Playing the London Palladium.
Doing Hamlet at the Globe.
Appearing in The Times.

The Times Children's Book of the Week: Magrit, by Lee Battersby.

The Times, people! The freaking TIMES!

Okay, the majority of the review is hidden by a paywall, but I think the bit you can read gives a fairly decent accounting of what they think of the book.

Did I mention the freaking TIMES? LIKES MY BOOK!

Labels: Magrit, reviews
Newer Posts Older Posts Home
Subscribe to: Posts (Atom)
Would you believe he came out well
He had a bright inquiring mind
His family knew that he'd go far
If he applied his time
But he started out standing on corners
And talking out loud, too loud
You see he couldn't believe in himself or the world
Or anything he heard