SILENCE OF THE HAMS

There's been a peculiar silence round these parts recently: we're changing ISPs, and thanks to the 19th Century, it's going to take 2 weeks without internet to have all the connections connected and the contracts contracted and the... well, fuck it, I'm on my phone and public computers until then.

Still, it has enabled me to do one worthy thing in the meantime: finish Magwitch and Bugrat, my palate-cleansing sorbet project between novels which has transmuted into a 16 000 word kids novel. Thanks to the upcoming long weekend-- made a day longer by a strategically placed RDO-- I'll be running through a first edit this weekend, and will hopefully be gently prodding Agent Rich as to his interest within the next two to three weeks, while I eye off the enormous pile of paper that is Father Muerte and the Divine and try to persuade myself that, seeing as I'm already in an editing mood, I may as well throw myself at it.

And now that the month of insanity at my day job has finished, I've been able to catch up on other, more personal things, like visiting my father and greeting my Aunty Celia and Uncle David a few days before they flew back to Nottingham after having been over for the better part of a month or more.

But, ultimately, this is a brief missive before the coins run out. More later, my little friends, but for the moment, imagine me snuggled under a blanket somewhere in the 19th century, pen in one hand, paper in the other, with a hot toddy or whatever it is old people in the 19th Century drink, waiting for the internet wallah to bring me my connection.

Posted by Unknown at 7:29 am No comments:

Ah, wedding humour. It's quick, it's easy, and it's infinitely variable.

This is one of them. 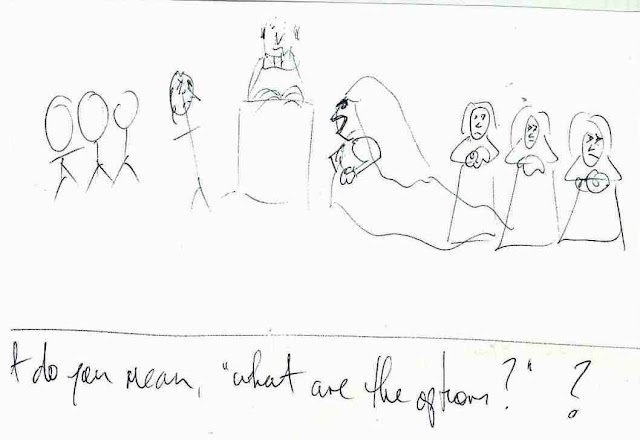 What do you mean, "What are the options?"?

Posted by Unknown at 7:15 am No comments:

Things have been quiet on the writing front in recent days as the day job has taken over my life. Two weeks ago we had the lovely Kaaron Warren over for the weekend as part of an art exhibition based upon her book 'Through Splintered Walls', and this last week has been eaten by the annual Castaways Sculpture Awards, which we stage on the beach every year and is bigger than a Justin Beiber-shaped rash. I normally keep the day job of these pages, but I might sneak some photos on here once I've got a few moments to do so, because frankly, they're cool.

In the meantime, there's a teensy bit of Battanalia still going on to keep you entertained. I've been interviewed over at Shelf Inflicted (great name!), and discuss my favourite dirty joke and how often an aspiring writer should have sex, along with a whole bunch of other fun things.

And my favourite type of package-- mysterious-- arrived in the mail the other day, containing these beauties: 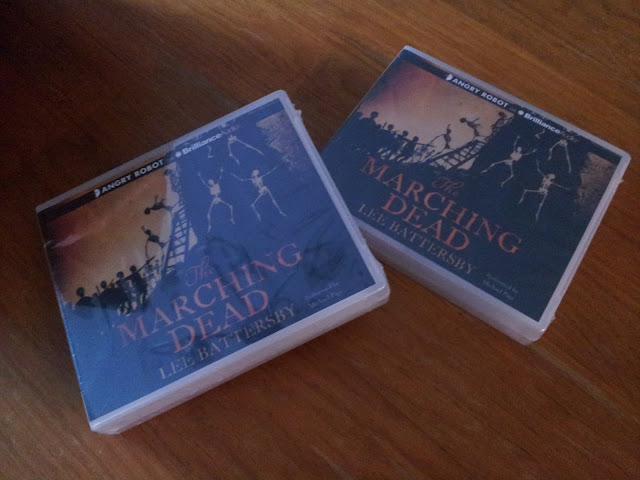 Marching Dead audiobooks from Brilliance Audio. 9 discs, 10 3/4 hours of reading time, narrated by audiobook veteran Michael Page: I've had them on in the car and a fine job he does, too. They're available now through any number of audiobook outlets.

Posted by Unknown at 7:31 am No comments:

Nothing much to say about this one, other than I love the look on Watson's face. I'd probably find to hard to replicate properly on a final draft, which is why I'm an author and not a cartoonist. 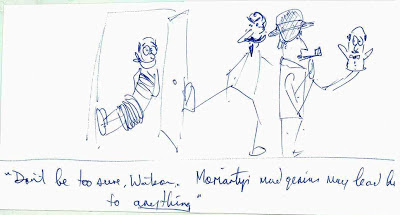 "Don't be too sure, Watson. Moriarty's mad genius may lead him to anything."
Posted by Unknown at 7:19 am No comments:

It's 1984. I'm 13 years old, pushing 14. My father has left us, and as a way of adjusting to our new life, my mother has scraped together some of our remaining money and managed to buy our first VCR. We join the only video library in town.

From now until I leave home, aged 22, this and the late night Friday Creature Feature are going to be very warm security blankets around my burgeoning imagination. I will discover Peter Cushing, Christopher Lee, Dracula, the Reptile, the Swarm, 1950s black and white SF movies, The Day the Earth Stood Still, Them!..... I am going to discover my world.

Soon, real soon, after we watch our first video (and for those who must know everything, it was Fire and Ice), we find Jason and the Argonauts. Valley of the Gwangi follows. Sinbad. Clash of the Titans.

But it's Jason and the Argonauts that sinks deepest.

Jason and his crew race across open ground, fleece in hands. The pursuing forces stop. Their leader raises his hand, filled with teeth from the wyvern Jason has only moments ago killed. He dashes them to the ground. Where they land, skeletons rise, fully armed-- I don't question how they have swords and shields. 30 years later, watching it with my kids, I still don't question. They close in open our heroes. A final, desperate battle is joined...

I don't think I've ever seen anything more exciting in a film, ever. That moment, when the skeletons form up with a thump of feet, when they bend forward and step inexorably forward, blew my teenage head the fuck away! All the computer imaging in the world has never felt as real as that moment, when something 3D, impossible and undeniably real took place on the screen in front of me, and changed the way I thought about storytelling forever. You can see it in my school work, in the stories I began to tell in English assignments. I became, not just a storyteller, but a storymaker.

Ray Harryhausen died overnight. He's been the inspiration for an entire generation of filmmakers, special effects creators, animators, and authors. I'm one of them.

Thank you, and goodbye.
\

A Father's Story by Lionel Dahmer

Jeffrey Dahmer will long be remembered as one of the most gruesome and appalling serial killers of all time. But if there was any hope that the reader might gain any insight into his mental makeup by reading this memoir, by the man who should have known him better than any other, it is quickly dashed.

Lionel Dahmer reveals himself as a cold, emotionally distant father and husband who's greatest influence upon his oldest son seems to have been to create an atmosphere of such utter disregard and disinterest that Jeffrey's withdrawal into an interior landscape of cruel and twisted emotional violence is not only hastened, it is almost ensured. Between long, rambling barely-coherent attempts to place his son's crimes into the context of his own failings as a person (Not a revelation goes by without an accompanying "Perhaps I had been naive..." or accompanying admission that Dahmer Senior had also had similar desires "but never took them that far", as if he is so desperate to claim any sort of emotional connection that he is willing to take some sort of pale credit for his son's monstrosities.) and slimy, ham-fisted attempts to place the blame for Jeffrey's behaviour on anybody else but him-- particularly his first wife, the fragile and quite-obviously emotionally bullied birth mother of his son's, Lionel gives us less an insight into his son's psyche than a pure view of a father and husband of stunning emotional disassociation: a weak, deluded, egotistical and loathsome little man whose multiple failings read like a litany of dissemblances and pitiful excuses.

A final chapter, added after Jeffrey's death in prison, simply adds a film of utter loathing to the reading experience, as father somehow contrives to tie in a possible redemption for his son with an incoherent, self-serving diatribe about the righteousness of intelligent design.

This could have been a searing odyssey of truthfulness and revelation, giving the reader real insight into a father's relationship with one of the most notorious monsters of our time. Instead, it is a worthless smattering of excuses, self-justifications, and oily smarminess. It is an utter disgrace.

View all my reviews
Posted by Unknown at 9:58 pm No comments:

When it comes to comedy, some characters (or at least, templates) just write themselves: the Incredible Hulk writes himself, as do robots, aliens, psychologists. Jesus is easy. Freud.

And Death. Death I can write gags about all day long. So: Death. Party. Relationships. Writes itself. 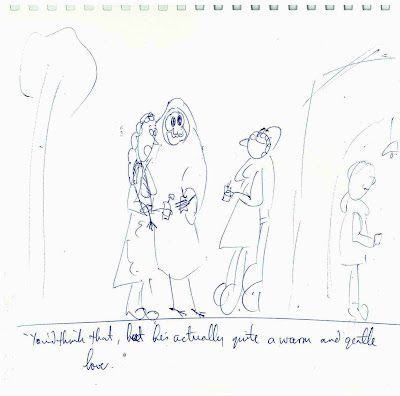 "You'd think that, but he's actually quite a warm and gentle lover."

Given how much skeleton sex my novels have ended up containing, is it any wonder I find Old Boney impulsively funny?

Posted by Unknown at 7:09 am No comments:

WORD FROM THE WEST

A nice surprise in yesterday's West Australian newspaper: a mention of The Marching Dead in the writing WA Recommends... column. That's the peak writing body in the state, recommending my novel in the largest daily newspaper in the state. Which, anyway you cut it, is pretty nice.

And let's be honest, what are the odds, normally, of a dark fantasy horror comedy novel with ninja skeleton nun sex getting a good write-up in a conservative mouthpiece like a daily paper, eh?

So I'm well chuffed. And for those of you who may not have picked up yesterday's paper, I have an ego and a photocopier, so here it is, in wondrous photocopyrama: 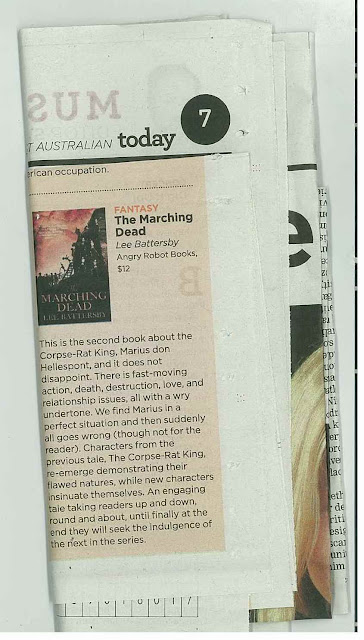 Posted by Unknown at 7:27 am No comments:

Labels: Marching Dead, reviews
Newer Posts Older Posts Home
Subscribe to: Posts (Atom)
Would you believe he came out well
He had a bright inquiring mind
His family knew that he'd go far
If he applied his time
But he started out standing on corners
And talking out loud, too loud
You see he couldn't believe in himself or the world
Or anything he heard