Some months ago, when it came out on DVD, we rented and watched Rocky Balboa. Whilst it'll never be regarded as great cinema, it was at least a fitting end to the franchise, emphasising the 'little tailor' aspect of Balboa's character and making allowances for time, age, and a certain amount of nostalgia, not only in Stallone's portrayal of Rocky, but in the central message that, whilst age may weary a man, it can give him the wisdom to accept that the battles most worth winning are those closest to the heart. Amidst the formula there was warmth, and dignity, and even a little grace. Not great cinema, no, but as the credits rolled, there was no small satisfaction in the journey's end.

Tonight, we watched John Rambo, the latest and last of the Rambo series of movies.

FundaMENTALly OVER
So, we did it: we packed the kids in the car, threw a picnic dinner in the boot, and ran a half hour up the coast to see Mental As Anything play a free gig on behalf of some building development or other that's going to turn the Two Rocks horizon into a Metro Brick wasteland.
The last time I saw the Mentals live was at the original Australian made concert at Subiaco Oval in 1987. 21 years...... where the hell did that go?
This time, the setting was a local park a street or so from the beach. A beautiful area, it was packed out with stalls, kite displays, and the sort of hand-made revelry you see at tiny suburban fairs thrown together by local councils because why the hell not, they've made a surplus this year. It was lovely: we made sand paintings, the kids got their faces painted, sweeties literally rained down from the sky as the kite displays revealed hidden self-operated pinata kite thingies.... We wandered, we sampled, everything was free, everyone was happy.

It ain't a day out if the faces don't get painted.

At 8 on the dot, a local support act took the stage. Erin and Connor dragged me up so they could have a look: their first concert experience, and they were instantly hooked. A single girl in her early twenties, with a guitar, a gorgeous voice, and a simple, balladic hook to her songs. Erin may want to be her when she grows up.

Erin Jane Battersby, this is your future.

The boys met friends. The boys disappeared. We didn't see them again until the music was over, and it was time to leave. It was that kind of evening.

The Mentals took the stage. Or, if I were to be precise about it, Martin Plaza and Greedy Smith took to the stage, along with three other blokes who were helping flesh out the retirement fund. No Reg Mombassa? No Pete Doherty? That's not Seagull behind the drum kit! Okay, okay, rest the inner fanboy for a moment. It's the music that matters. Give them a chance.

Fact number 1: I didn't drive for half an hour to watch a country and western cover band. When you've got a 30 year back catalogue, I want to hear your music.

Fact number 2: Cool as it was that they played Lyn's favourite song, Apocalypso would have been cool, too. Don't Take Your Love To Town has never been cool, ever.

Fact number 3: Greedy can no longer hit the high notes that songs like The World Seems Difficult demand.

Fact number 4: Martin can no longer hit any note.

It was interesting to note that, whilst the core audience consisted of people our age who could remember the band in their prime, from our vantage point we could see that most who left early were from that self-same core audience. By the time the band had concluded their dozen-song set, most who remained were like ourselves, those who had teenagers roaming the skate rink and climbing frame, or who had a madly-excited six year old because she recognised Mr Natural from the iPod (Of all the songs, this was the one that stood up best, largely because its spoken word delivery demanded nothing from the band). Bizarrely, at the undead zombie second death of their career, they may have picked up a fan in Erin, who spent a significant part of the concert dancing near the stage with her Mum, and another significant proportion begging me to take her back up, whereupon she climbed on my shoulders to get a better view of the stage.

Fangrrl! Anything is worth it to see this kind of delight on your child's face, even Live It Up

As underwhelming as the concert ultimately proved to be for Lyn and myself (although I should point out that my darling was very bouncy and dancy for the first 4 or 5 songs, particularly as it contained Plaza's cover of Concrete and Clay), it was a wonderful evening out.

As a father of a large family, there's no happier feeling than watching my kids, out and about, gaining first experiences, meeting friends, exploring new facets of their world. And as a husband, there's no better sight than a happy, vibrant wife, sharing her happiness with an adoring daughter. So the band's performance was a tired shadow of their former selves. So what? It is the music that matters, and we have that at home. And next time Erin hears Mr Natural in the car, we're going to remember something special together.

We drove home late, tired, full of sugar, and prepared to accept that you just can't revisit the 80s, no matter how much you tried. Tune in this time next year, when I'll probably be saying the same thing after going back to see The Uncanny X-Men or Pseudo Echo..... 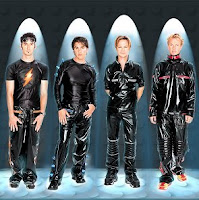 Alright, Two Rocks! Thanks for letting us out of the freezer! Now, are you ready to mildly Europoooooppppp?

PS: I've just noticed how much that last caption looks like Europoop instead of Europop.
PPS: I stand by it :)
Posted by Unknown at 2:14 pm 2 comments:

The table of contents for Dreaming Again has been released, and the book itself is, apparently, due to his the shelves in June. Until then, feel free to salivate over this little lot:

It's particularly pleasing to see so many of my Clarion students make the list. New wave indeed! The chocolate river flows far and fast, my little grasshoppers! (Don't worry, normal world: only 16 or so of you are supposed to understand that)
Posted by Unknown at 5:28 pm No comments:

Labels: writing
JOIN US FOR THE APOLCALYPSO

Tomorrow night, we've learned, Mental as Anything are performing a free gig at Charnwood Reserve, Lisford Avenue, Two Rocks. The show starts at 8pm, but from 5pm they have free kids activities, a bouncy castle, face painting, and the like.

Luscious and I will be packing the kids up, throwing together a picnic dinner, and heading down to eat, dance, and laugh over how fat Greedy Smith has become.

Join us.
Posted by Unknown at 5:24 pm No comments:

INVADED BY A SOLD STORY

Good news today: Ideomancer has accepted my story Invaded By an Intimate Storyline which, amongst other things, features a cameo by one of my favourite Clarion South inmates, Michael 'The Patternless Man' Greenhut, as an RPG-playing intercontinental bomber tail-gunner.

Bet that gets at least one of you reading it once it's published :)
Posted by Unknown at 8:57 pm No comments:

Posted by Unknown at 8:55 pm No comments:

Fat men in all-over protective suits and heavy plastic face masks sweat. And puff. And get carpet burns from throwing themselves behind giant plastic barriers while teams of rampaging teenagers try to shoot the fat man’s nads off.

5 days later I’ve still got the bruises where the paint balls hit. Those bastards sting!

Ever-groovy Ben Szunskyj has announced the arrival of SIAWF Volume 1, and let me tells ya, the contents list is a doozy! To whit:

Essays --
"Lionel Sparrow (1867–1936): An Unknown Australian Writer of Gothic Horror" by James Doig
"The Weird Verse of Christopher Brennan" by Phillip A. Ellis
"Wandering Child: The Fantasies of Vernon Knowles" by Mark Valentine
"An Afternoon with Elizabeth Jolley, author of The Well" by Benjamin Szumskyj
"Shadows & Sexuality: The Horror Stories of Stephen Dedman" by Benjamin Szumskyj
"'Tim Winton's Take on the Weird: In the Winter Dark as Cross-Genre Fiction" by Phillip A. Ellis "A Bibliography of Australian Fantastic Literature to c.1960" by James Doig
"Brett McBean: An Appreciation" by Tim Kroenert
"Thrills and Excitement, Adventure and Action: Don Boyd, an Endless 'Myth-Cycle' Unto Himself" by Charles Lovecraft & Margaret Lovecraft

It’s available now, so get the heck over to the site and order a copy of what’s shaping up as an important critical journal.

THE GREEN LANTERN IS NOW BURNING

I know you’ve been waiting: head over to Strange Horizons now, and you’ll find my poem I’ll Keep a Green Lantern Burning. Ta-daaaaaa!

Swancon, this year, is the National SF Convention. Which means that, apart from being eligible to vote for the Western Australian SF ‘Tin Duck’ Awards, members of the convention can also nominate and vote fro the Ditmar Awards.

So should it interest you to know, the Battlist of eligible works for 2007:

Year 1 already? When did Erin get so big?

And how cute was it to see her bound out of her room at 6am on Monday morning, fully dressed in uniform and hat, with her backpack on her back, ready to go? Poor thing: the longest 2 and a half hours of her life…..
Posted by Unknown at 8:48 pm 1 comment:

Labels: Aiden, awards, birthday, Erin, writing
Newer Posts Older Posts Home
Subscribe to: Posts (Atom)
Would you believe he came out well
He had a bright inquiring mind
His family knew that he'd go far
If he applied his time
But he started out standing on corners
And talking out loud, too loud
You see he couldn't believe in himself or the world
Or anything he heard