Seven years ago today, for reasons that may have been clear only to her, Luscious threw me a bone and married me.

If she's regretted it, she's kept it to herself.

So, being in the fortunate position of remaining deeply in love with a woman I find more beautiful and more wonderful every day-- a woman who continues to astonish me with her intelligence; talent; caring nature; capacty for forgiveness; and loyalty to herself, her family, and her ideals; it's left to me to say, simply:

Oh, it is official.

The cover art for The Corpse-Rat King has been unveiled on the Angry Robot website and oh, it is so lovely.

Am I chuffed? Am I fucking what! So much more beautiful than I had hoped for, it's the work of Nick Castle, who has provided covers for the likes of Nora Roberts, Ellis Peters and Donald Westlake, so I am in some very nice company indeed. I may be slightly biased, but I think this is a thing of beauty. 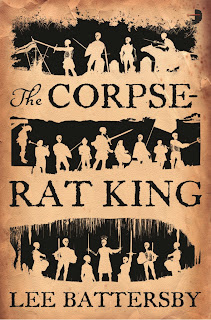 Go on, be honest. You really want to buy it now, don't you? Well, come September, and we'll all be rubbing this cover against our cheeks and making soft little mewling sounds.

Okay, well, I will. The rest of you should maybe just read it...

Over at the Screaming Ink website, the groovy Mark Farrugia, co-editor of the upcoming Midnight Echo #8, has posted a list of short stories that have made an impact upon him due to their offbeat and disturbing nature. The entire post, entitled Fiction That Has Stayed With Me, is a nice little run-down of one man's reading tastes.

If you pop down to number 46, you'll see my beloved Luscious' story As We Know It. It's a nasty, unsettling little gem of a type she does superbly: short vignettes starring a woman who says all the 'right' things and does all the 'right' things, but still ends up disturbing the living buggery out of you-- femininity inverted, revealing all the rages and injustices that are subsumed beneath convention and 'obedience'.

As We Know It first appeared in issue 10 of Borderlands magazine, back in 2008. The magazine has gone the way off all things, which is a pity as it was a classy little unit, but Lyn has kindly agreed to let me reprint it here in its entirety. So, for your entertainment, and in the hope that it will leave as lasting in impression upon you as it did Mark:

As We Know It

Don't get me wrong, sometimes you like the sex. You enjoy the way he paws at your breasts, tweaks your nipples and runs his hands over your butt as he whispers eternal love in your ear. You're even partial to the odd slap on the thigh as he grabs your hips and grinds himself into you, the rhythmic thwack, thwack, thwack of flesh assaulting flesh as you thrust against one another, him grunting, you panting, thrusting and grunting, panting and thrusting, panting, grunting, grunting, grunting, moaning, faster, faster, faster,
breath,
hold it,
hold it,
aaaahhhhh,
And he's come, and you've faked it, and you're lying on the bed, on the grass, on the stairwell leading to the Humanities building and you recall the acrid tang of that one cigarette you had four years ago and wonder whether it's too late to take up the habit.
No, it's the responsibility you're avoiding. He doesn't have to worry about words like breech or caesarean or placenta praevia or any of the hundreds of medical terms that share just one meaning: death.
You search the campus surgery, ransacking the cupboards, searching for samples. You have your preferred brand, the one that doesn't make you feel bloated or teary or furious, the one that acts as it should, regulating your cycle and preventing his little soldiers from invading your ovum.
You find a  packet in the nurse's station, enough to cover two months, but you're always aware, always aware: the stocks are finite. Sperm isn't.
Once upon a lifetime ago, you were not alone. People milled through your life with their bad breath and sweat and the endless chatter of mobile phones and you barely noticed them, noticed him, failed to perceive the ebb and flow of one person after another.
People were unimportant.
Once upon a time.
And now, you're at the happily ever after and it's just you and him and you can't help but notice him because he is all there is and he wants more, many more, a world of more and you
just
don't.
"Maybe this month," he says as he pushes you onto the table and opens you up with sex-stained fingers.
You nod and agree, that it's your responsibility, but all the while you're aware of the sugar bowl, the tomato sauce bottle, the serviette dispenser as they bounce against your head and you try to distance yourself--
Bristol, Devonshire, London, York--
"What are you thinking about?"
Lying back and thinking of England.
"Maybe this time," you say.
--Stratford Upon Avon, Ferry Across the Mersey--
His face screws up into a frown. Sweat drips onto your breasts, into the dip of your cleavage--
-- Eastenders, Dr Who--
Then it's over and you sneak off to the bathroom to flush away his semen. You pop out another pill and swallow it with a mouthful of tepid water from the basin.

You are the only woman for him, he tells you and you buy into it because it makes you special. You don't know why you were chosen, it's his mission not yours, but you continue on with your quest and take long walks off campus and one day you find it, the Promised Land. A chemist, unopened, unexplored, and it's a simple matter to find a brick and aim for the window and an alarm shrieks its outraged cry while you head for Mecca, and there it lies, the Holy Grail, hundreds and hundreds of little tan tablets in their foil packets beckoning to you, promising years of infertility.
Your lover doesn't suspect a thing, him with his self-appointed assignment and need to repopulate the Earth in his image. You've seen behind the mask to the devil within and you know, you know there'll never be one last hurrah, no last moment of giving fate the finger.
For you, for all of you, this is the end of the line.
Because he is the last man on Earth.
And you still don't want him.

Subbing for Lyn as she edited ASIM #11. Reading stories. Nope, nope, bored, yawn, nope, nope, fuck me! My first taste of Haines: Hamlyn. Halfway through, the Pied Piper sits at the base of a tree, playing his pipe, as a townswoman approaches to ask after the fate of her son. The son emerges from underneath the piper's cloak. Wiping his chin. I'm an instant fan.

Meeting him for the first time at an Aurealis Awards after party, sometime back in 2004 or 5. We'd conversed on the mailing ,lists for a couple of years, knew each other's attitudes-- if little else, as is the usual-- and shared a mutual respect. He's loitering around the entrance to the bar as we made our way in, and hails me from a deep shadow. A tall, good-looking fellow with a beautiful head of hair and a laconic, lazy smile-- I can feel the women of Brisbane going moist at the knees the moment we hit the bar. We spend an evening chasing beer after beer, leaning back and swapping stories in a mood if instant and mutual ease.

Half-time at a workshop for Aurealis nominees helmed by Ellen Datlow. I'm in a corridor with Paul and Geoff Maloney. Geoff's just brokered an introduction for me with Sean Wallace of Prime Books, and Sean's agreed to publish what will become my collection Through Soft Air. I've got Geoff bailed up against a wall and am singing the praises of Haines in a loud and insistent manner. Paul is laughing his arse off and insisting that he's crap, and that I'm talking out of my arse. Prime publishes Doorways of the Dispossessed, and we have something else in common-- publisher horror stories with which to entrance wide-eyed newbies whenever we meet.

A long, rambling, multi-post email conversation about They Might be Giants, Madness, and Thomas Dolby-- blowing off steam, junking on about favourite songs, following Dolby's blog, and hidden fandoms. A few days later, a DVD in the mail, addressed in Paul's epileptic-seagull-with-ink-on-its-feet handwriting-- His entire Dolby collection: albums, videos, the lot. Burned to disc, for no other reason than he knows I'll dig the shit out of it.

Seeing him for the last time at Swancon 2011. Sick, wasting away, skeletal. Everybody tiptoeing around him, not saying what none of us wants to be the first to say. He spies me as I'm coming towards him. "Fuck," he says. "You look like shit." He's laughing his arse off, once again, and I want to join in but I can see his eyes, and they're like yellow coins, and there's a nasty fever at the back of them: he's trying to fit it all in, and say goodbye to everyone but I can see it's eating him alive and now I'm feeling guilty because I want to join in the banter but I can't. Later, launching his final collection, The Last Days of Kali Yuga, he reads to a room full of the best horror writers in the country, and fans, and friends, and every one of us has tears streaming down our faces, and we all line up like supplicants to have him sign our books. And I can see he's exhausted, and that there's no way he's going to give up one second of this, so when it comes my time I lean forward and smile my sharingest smile and say "Say something nice, you fucking faker." And he laughs his arse off, like he always seemed to do when we were together, and wrote "Thank God this isn't a Prime Book." Our shared story, one last time.

Hugging him one last time, before we all broke up and went our separate ways. Feeling the bones through his shirt, feeling him wince at the contact but not let go.

In the shower this morning. Lyn puts her head through the door. "Paul's dead." Bursting into tears.

Labels: death, friends
Newer Posts Older Posts Home
Subscribe to: Posts (Atom)
Would you believe he came out well
He had a bright inquiring mind
His family knew that he'd go far
If he applied his time
But he started out standing on corners
And talking out loud, too loud
You see he couldn't believe in himself or the world
Or anything he heard