If you're unfamiliar with the Review of Australian Fiction, it's a fantastic project which pairs an established author with one on the rise, every two weeks, and makes their work available for a nominal price. Previous issues have highlighted the likes of Kim Wilkins, Trent Jamieson, Melina Marchetta, Christos Tsiolkas, Meg Vann and Kirstyn McDermott.

The current volume is edited by the superfabulous CEO of the Brisbane Writers Festival, Ms Kate Eltham, and the latest issue pairs rising star Amanda O'Callaghan with 8000 words of my own special weirdness called The Canals of Anguilar, which has prompted Ms Kate to draw comparisons with Dickens, Pratchett and Poe. Which I'll take any day.

Here's a little taster to whet your appetite:

Her name was Fastny. It didn’t take long to make a decision, once she was amongst us, needling, pushing, refusing to allow us to sink into the complacency that large groups of men, united by a common urge to drunkenness and forgetting, will resort to at a whim. We had no plan, no desire, until she arrived. But fear of her scorn replaced all our separate terrors, and with her nipping at our heels it was only a matter of time before someone mentioned Anguilar.
Anguilar, city of the green walls: more canals than Venice or Tellifluour, so remote that only a journey of seven deserts can take you there. It is not a destination. It is the very reason a journey is undertaken, a place so alone that of all those who set out to find it, less than a third ever get there. Where the others end up, nobody knows: the residents do not speak of them, and arrivals are too relieved to think about it.

It's available *right bloody now* for the princely sum of $2.99. 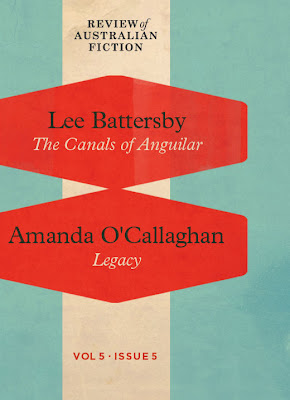