Hope it's been a good few days for you all, no matter how (or not) you celebrate (or not) the period.

It's been a mix of most excellent (in my best Bill and Ted voice) and catastrophic here at the Batthaim. We're currently neck deep in plastic dinosaurs, little egg-shaped iPod speakers, fishing rods, watercolour pencils, jewellery and reading material (I myself received a much-needed new wallet and a funky biography of Charles Manson), and the children are running around like mad things with their cousin Tanika who stayed the night after coming for a barbecue with Lyn's brother Roger and his partner Cassie last night. Christmas is always a balancing act between our desire to give each other cool things and Lyn's religious convictions (which include not acknowledging Christmas or birthdays), so we end up usually just having something that can best be described as "Present Day with Food splurge". It seems to work well enough.

Which is all balanced by our airconditioner blowing up a few day ago, our reticulation system blowing up a few days after and our garage door deciding yesterday to come off its hinges and get stuck to the point where no human agency can move it. As it's currently shielding the work car I have to get back to work on the 4th, this is just a teensy bit of a problem. Annnd also an indicator that I'll be spending 2011 as poor and under the cosh as 2010.

Be that as it may, I do have something in the gift department for you all: the Christmas edition of Terra Incognita, Keith Stevenson's fantastic SF podcast series, features not one, but two stories: my own In From The Snow, and my good friend Jason Fischer's extraordinary Undead Camels Ate Their Flesh, which features Jasoni singing the Undead Camels song.

That's right! Jasoni singing! How can you pass that up?

Go. Listen. Enjoy. And here's to a happy and profitable 2011 to you all.
Posted by Unknown at 9:11 am No comments: Links to this post

Yeah, so I posted once back on the 7th with a word count, and then went suspiciously quiet. So how did I do?

AND AT HALF TIME, THE SCORE IS: LIFE 3, BATTERSBY NIL

If you'd asked me a year ago, I'm not sure what I'd have told you about how I felt at the thought of turning the halfway marker and heading for home. (I'm working on an average lifespan of 8o here. Anybody who knows better about the avergae lifespan being shorter can keep it to themselves. I bet you never get invited to parties....).

I was trapped in a job that did nothing for my soul except eat it, with little to no hope of escape. I was unhappy about the flow of my writing career-- I had become becalmed, and felt only isolation from my peers. My family life was happy, at least: I have a truly beautiful and wonderful wife, who is the central happiness around whom the family revolves, and my kids are the perfect combination of delightful and insane. But as good as it was was as good as it was going to get, and once I left the house it really wasn't that good at all. Truth be told, I was spending more and more time not leaving the house: my sick days were piling up, my lunches were long and my leaving times earlier and earlier, and once the front door shut behind me, the last thing I wanted to do was drag myself out to spend time with people I knew weren't that happy to see me and weren't heading in directions I wanted to go.

39 wasn't a particularly good place to be. The prospect of spending most of the last half of my life in the same situation wasn't even depressing. It was just... numbing.

Then it got weird.

For the first thing, I escaped my job. Out of the blue, a position in arts administration became available, and bugger me, I got it. By the skin of my teeth-- my gaffer will cheerfully admit they took a chance on me, and thankfully, cheerfully admit it's worked out-- but I was able to walk (Walk? Fucking RUN!) away from my soul-destroying job (the one I ate to find comfort from, the one that had helped me gain 20 kilograms, the one that had my wife begging me to stay home most Mondays so I wouldn't come home so miserable and depressed) and start again.

Six weeks after I started I was on a beach, helping to install a sculpture exhibition. I spent the week of my 40th birthday administering the first art exhibition I'd ever curated. I've spent the last month organising 2 art exhibitions; 3 writing talks; an online writing group; liaising with the Navy, local yacht club and three bands regarding our Australia Day celebrations; and running a Nanowrimo region. I travel a third of the time that I used to, actually speak to my colleagues, oh, and enjoy going to work. It's not too mad a claim to say that I saved my life by finding this job. Not too mad at all.

Added to which, somewhere in amongst all that, I turned a corner in my writing career. Perhaps it was the change of heart that came with the change of job, but suddenly, I forgot to give a damn what people thought of me. I forgot to get caught up in the politics of the scene. I forgot to keep in touch with people, and in doing so, went a long way towards learning who the people were that wanted to keep in touch with me. The only thing I remembered to do was take joy in the writing act itself. I wrote a novel this year, and a bunch of poems, and drew some cartoons, and none of them will see the light for a while, if ever, but the novel's good, and the cartoons were fun, and I like poetry.

And I have no idea what the rest of the world is doing. I haven't read a blog for nearly a year-- sorry to those of you who have blogs and are taking the time out of your lives to read this. I apprecaite your interest. But when it comes to reciprocating, for the first time in a long time, I'm too damn busy, and it's good. I used to read blogs to keep away from writing, and now I'd rather write. My peers interact with me when they want to, if they want to: the lovely people at the Australian Writer's Marketplace commissioned me to write an online SF course during the year, and I've had a constant trickle of communication from friends and colleagues that I've accepted on its own merits rather than going out searching for it. I'm more balanced, obviously, and happier. But I've also shucked away a lot of dead wood, a lot of former friendships that I had to realise were dead before I could comfortably offload them. Life is lighter now.

And now I'm halfway through another novel-- the Father Muerte one I mentioned at the start of November. 51 000 words, to be reasonably precise. I'll be finished it by the end of January, by which time it'll be something like 2 years since I've seen a short story in print. But I'm even writing them again: I've got some markets I want to try, and a rewrite that an editor is asking for, and strangely, the writing life is enjoyable again.

So, cliches about life starting and blah blah blah aside, being 40 looks pretty good so far. My happiness isn't perfect-- I've got an awful lot of excess weight I have to lose; I'm in pain a fair bit of the time, although I've come to live with that; and seven of us in a house on a single wage means we won't be seeing Rome any time soon.

But I am happy, and that alone is a massive change of outlook from a year ago. 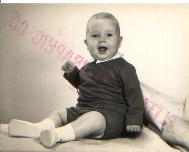 There's a lot gonna happen kid. Don't forget to duck.
Posted by Unknown at 4:50 pm 3 comments: Links to this post

WHILE WE TALK ABOUT BIRTHDAYS

November is a mad-ass month for birthdays around here. In three weeks, half of our family have one, not to mention my neice Zara (Hi, Zara!), starting with myself on the 11th and culminating in Erin in the first week of December. That's 5 in all, in 24 days.

So to my sensational 6 year old, the Connorsaurus, and my beautiful 9 year old Erin Jane Butterfly, all my love. There's no end to the joy and wonder you both bring to my life.
Posted by Unknown at 4:08 pm No comments: Links to this post

NOVEMBER WAS A MAD OLD MONTH, MY FRIENDS

Ahhhh, the best laid plans of mice and Lee are aft to gang aglay all over the frigging place.

Well, let's be honest, the entire household has been turned upside down, inside out, and arsehole to breakfast by this: 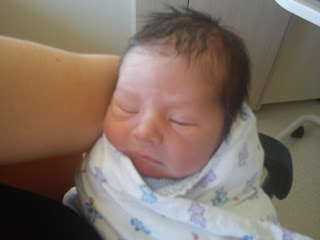 Luc Aden Jeremy Triffitt, my first grandson, arrived in the world at near-as-dammit 11pm on the 11th of the month, having caused his Mum and Dad to finish the last mouthful of my birthday dinner and say "Well, that was nice. Can we go to the hospital now?" He was a tiny, tiny little thing on arrival-- 3090 grams and 49 centimetres long, and is a tiny little thing now: at the pool this morning, two old ducks who were cooing over him had to be persuaded that he wasn't actually only a few days old.

He's been with us three weeks now-- parents Aiden & Georgie have neither the spondoolies nor the age to live in their own space, and he is a beautiful, smiley, snuggly little bugger who has the good grace to cause everybody ructions and then fall asleep peacefully within about 90 seconds of me picking him up. Needless to day, he and me are the best of buddies :)

So, this the world, Luc. Try not to break it, and be back for tea.
Posted by Unknown at 4:02 pm No comments: Links to this post

Labels: Luc
Newer Posts Older Posts Home
Subscribe to: Posts (Atom)
Would you believe he came out well
He had a bright inquiring mind
His family knew that he'd go far
If he applied his time
But he started out standing on corners
And talking out loud, too loud
You see he couldn't believe in himself or the world
Or anything he heard