All right, my darlings, it's official and going awwwnnnnnn..... 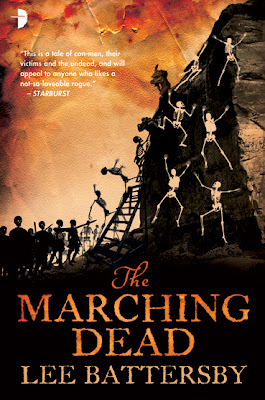 Thanks to the brilliant Stefen Brazil we'll be launching Marching Dead at the picturesque Stefen's Books, 8 Shafto Lane, Perth, at 2pm on Saturday 6th April.

I'll be signing copies, inflicting a reading or two upon the gathered multitudes, and generally making with the fabulous author dahlink behaviour-- kissing babies, shaking hands with dogs, pinching arses, sniffing seats.... no, wait, that would make me a Liberal Party politishithead..... not to mention a cavalcade of entertainment like dancing girls, bear-baiting, midget death-trap wrestling and arbalest surfing*, and then we'll finish it all off by heading over the lane to The Generous Squire, where Stefen has set aside an area especially for general mingling and the quaffing of hearty ales.

Told you he was brilliant.

Come on down, introduce yourself, grab a signed copy of Marching Dead or The Corpse-Rat King if you're the kind of lazy layabout who hasn't read it yet, and generally hang out with us and have a good old nattery, beery, Sunday afternoon you know you've earned.

What could be better?


*may not contain any of these things. Except for midget death-trap wrestling. That shit is hilarious.