Last weekend, Luscious and I divested ourselves of all encumbrances and headed into Perth to spend the weekend at the annual convention of crime writing and investigative sciences, CrimeScene WA.

CrimeScene is a wonderful convention, not least because it has an incredibly strong science stream, presented by top notch industry professionals with a set of presentation skills that makes the traditional writing convention "three talking heads and a table" scenario seem decidedly second rate. For the first time in a long time I had agreed to be a part of more than one panel at a convention: apart from a solo presentation on writing settings, I agreed to assist Lyn with her presentation on Women Characters in Crime and take part in a panel discussion on what to do once you have been published. I was keen to see whether the change in convention genre would result in a change in approach to panel structure, so I packed our little Powerpoint shows and book-buying money, and away we went.

The convention was held at Rydges Perth, in the heart of the City: a hotel with a funky 70s retro-future vibe going on in the foyer, but with an obscene parking rate (valet only parking at something like $70 a day) and the traditional convention hotel quota of working lifts-- in this case, one of four. It was a delight to meet up with writing Guest of Honour Tansy Rayner Roberts, who I've known for years but seldom see in the flesh due to living on opposite sides of the country, and one of the nicer things about attending a convention outside of my own genre backyard was the opportunity to bump into authors with whom I interact in my day job but rarely on an equal literary footing: sharing the registration queue with Sarah Evans, a writer of my day job acquaintance from Bridgetown, was a lovely moment, as was a breakfast shared with Michael Murphy, up from Capel for the weekend. And Linda, Jay, and Todd-- the convention committee-- are good pals who treat their authors and experts wonderfully, so apart from the joy of their company they always make me feel like I want to do my best for them.

Thanks to the interwebbernet we found some cheaper (not cheap, cheaper) parking nearby. The walk to and from the hotel, coupled with a wander into the main shopping mall at Sunday lunchtime when we needed a break to visit the Nespresso store served one purpose, at least. Living so far away from Perth means we visit it rarely, and so had failed to observe a small but subtle change that has overtaken the CBD-- it's become a complete shit hole: filthy; filled with empty shopfronts; and generally more run-down than I have seen it in a long time.

One particularly unpleasant reminder of the inhumane and uncaring social policies of our State and Federal Governments was quickly apparent, too: I've never seen so many homeless people tucked into doorways and crannies as I saw this weekend. I'm not naive enough to believe Perth is any sort of utopia, or that homelessness does not exist here, but the two blocks between the car-park and hotel were occupied by no less than 8 homeless people trying to find shelter or ask for assistance, and that's a critical mass that's hard to ignore. There's rot in the heart of the apple in Perth, and it's beginning to show. One wheelchair-bound old lady, in particular, seemed to represent the failure of our social systems: passing her on the way to my nice middle-class hotel room to play at my middle-class pastime added some uncomfortable self-awareness of the advantages I take for granted: 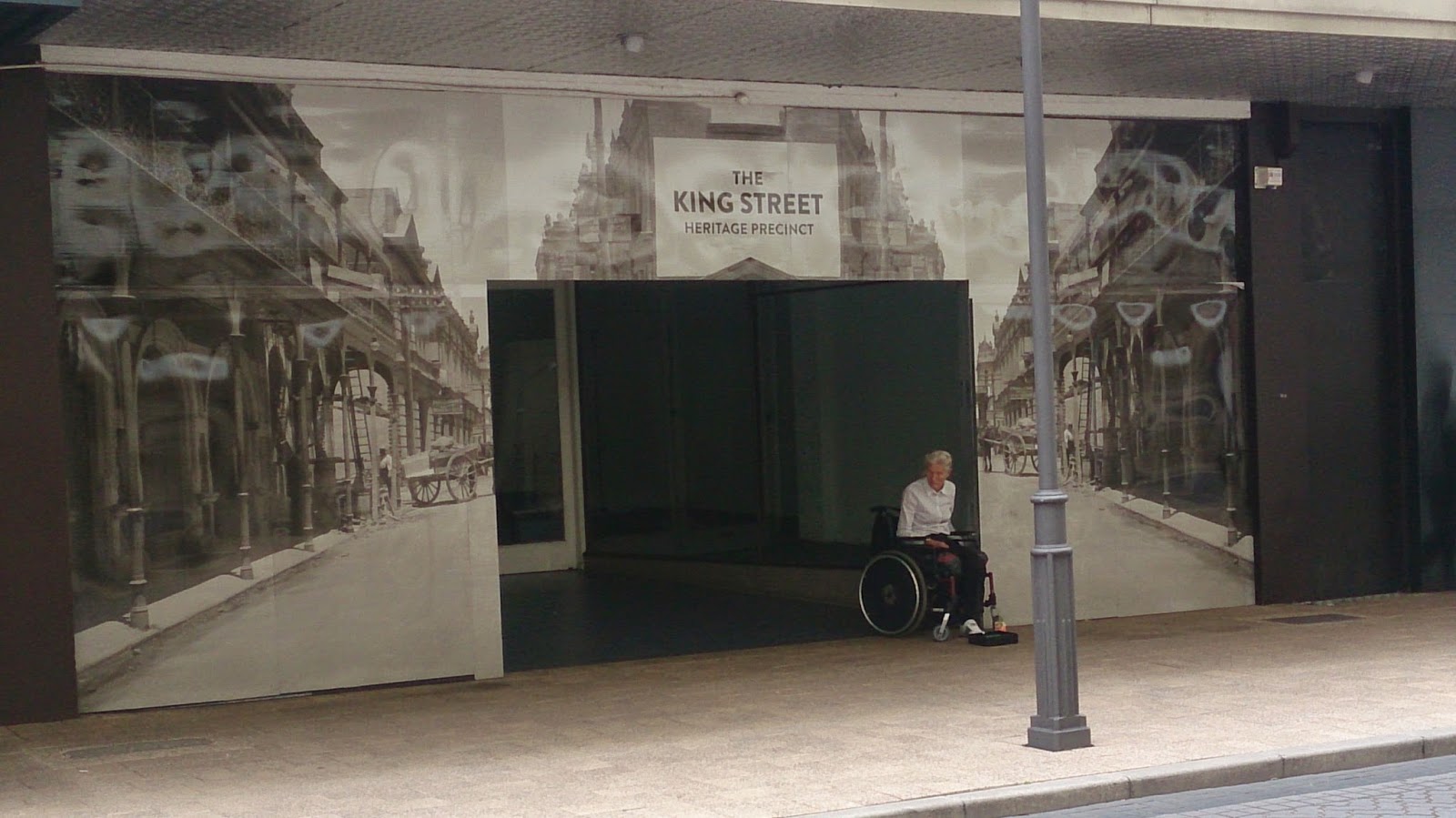 This the kind of heritage you were talking about, City of Perth?

Still, on to the convention itself, and it was clearly apparent that this is a convention in two parts.

The science stream was utterly fascinating, with strong presentations on a wide range of topics. Highlights for me included a discussion on psychopath and offender profiles by Associate Professor Guy Hall, with an emphasis on the Claremont Serial Killer; a dissection of the murder scene of Don Hancock and Lou Lewis by Sergeant Clayton Bennie, the bomb squad Sergeant who was CSO at the scene; palynologist Doctor Lynne Milne discussing the study of pollen within crime scenes; and a history of bog bodies by Doctor John Watling. Each of these presentations was highly interactive, with a strong public speaker in confident control of both their subject matter and the audience, and excellent visual presentation aids that stopped the audience feeling like they were simply privy to a private conversation. More importantly, each presentation was focused, and delivered great value for money. I came away fascinated, educated, and with a feeling that I had been exposed to the best this particular industry had to offer.

The writing stream, I enjoyed not quite so much, for a variety of reasons, chief amongst them being my own involvement: in the end, CrimeScene felt like not much of a writing experience, and more often than not I wanted to be in the other room where the interesting crime stuff was happening. Clearly, most of the attendees agreed with me: apart from the ongoing procession of "three heads and a table" panels, the rooms were, quite simply, verging on empty whenever I attended a writing stream session, as the majority of con-goers were in the far more exciting science stream rooms. My own presentation, on creating settings, for example, attracted three attendees, and the experienced amongst you will quickly work out that one of those is Stephen Dedman, an author to whom I reckon I can teach just about the square root of fuck all: 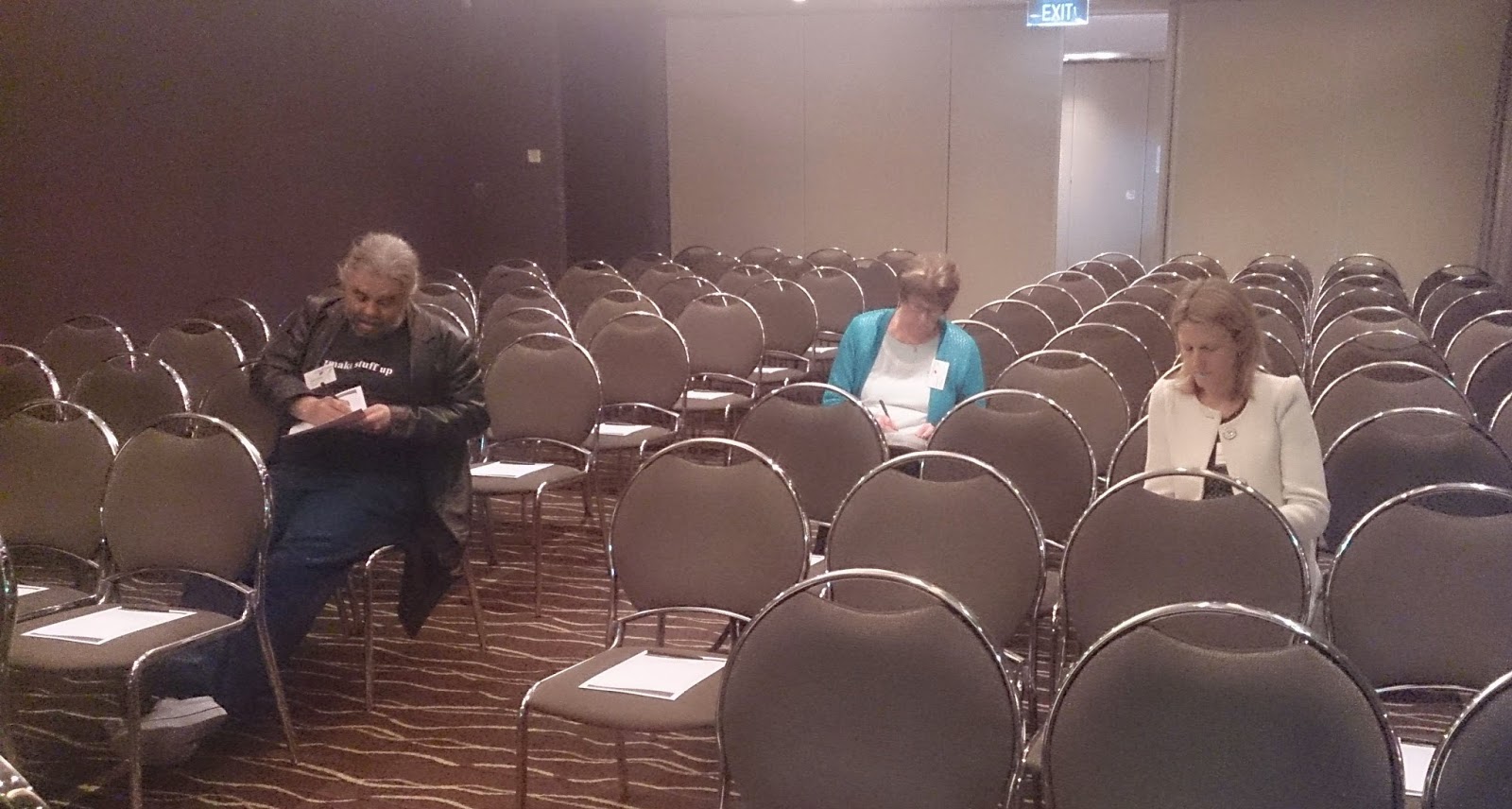 Other writing panels I attended fared little better, but in all honesty, the majority got what they deserved as far as offering entertainment goes: there's only so far a crime convention can go when the majority of the writing stream consists of writers outside of the central genre, and particularly when many of the sessions are programmed against proven entertainment winners: Professor Simon Lewis and Hadyn Green are long-term CrimeScene alumni, for example, and deservedly popular, and the aforementioned discrepancy in presentation skill was overwhelmingly apparent. While I enjoyed assisting Lyn with her Women in Crime panel, I once again came away feeling that being a panellist at small scale conventions is something I no longer enjoy.

Lyn had been battling illness all convention-- and, indeed, spent the following week bed-ridden with a chronic chest infection-- so we finally gave in to the inevitable and left before the closing ceremony, so we missed the announcement that the convention is going on hiatus. It's a pity, because as a small scale industry exhibition it's the most enjoyable one I've ever attended. My hope is that it returns, with a strong focus on the elements that make the crime and suspense genre such a compelling one to read, watch and enjoy, and perhaps, with a writing stream that goes out into the community outside of the convention time frame so that it doesn't suffer in comparison to the far more professional presenters who populate the science and crime streams.