Ye Gods. Where does the time go? Busy busy busy. There’s been a 2 week holiday in there, somewhere: two weeks where I kept the hell of Facebook and the internet and writing while I bent my back over exercise and gardening and house maintenance tasks that needed doing—and lost 2 kilos into the bargain—and entertained myself with my Lego addiction. And damn it if I’m not happier for having done so.
So. What’s gone on in that time? Bits and bobs, my friends. Bits and bobs.
DAGGER, DRESNIA, ONE THEREOF


Swancon happened over Easter, and I wouldn’t have paid much attention this year except that, for reasons known only to her, the lovely Satima Flavell-Neist asked me to say a few words in her defence as she launched her debut novel, The Dagger of Dresnia.

Satima’s a fantastic inspiration to anybody who feels like they’ll never achieve their publishing goals:  The Dagger of Dresnia is the result of 11 years of hard work, faith, and perseverance, and it’s pleasing that she’s managed to partner with an aspiring press like Satalyte Publishing, who are looking to stake out a permanent place in the Australian publishing landscape. It’s a bold venture, and I’m hoping that both Satima and Satalyte receive the very best of fortune, not to mention sales.

If you can judge a person by the quality of their enemies then Satima must be rubbish indeed, especially if you can get the likes of Juliet Mariller and Glenda Larke to speak at your lunch. Or maybe that just speaks to the quality of your work, and of you as a person, non?

The Dagger of Dresnia is book one of a trilogy, and you can purchase it from the Satalyte website here. I managed to snaffle a few quick snaps of the launch in between talking-type duties: 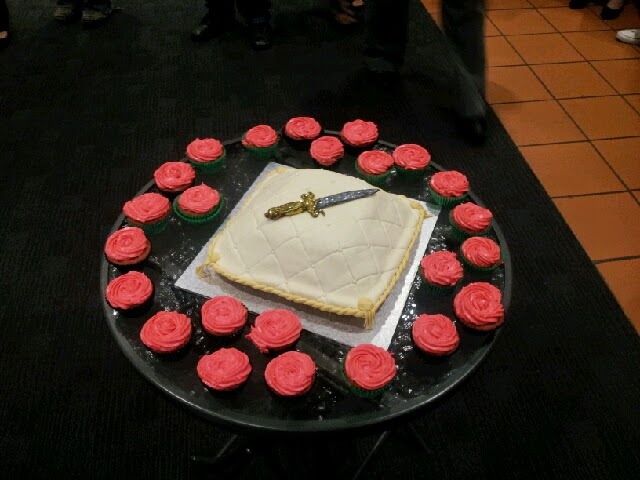 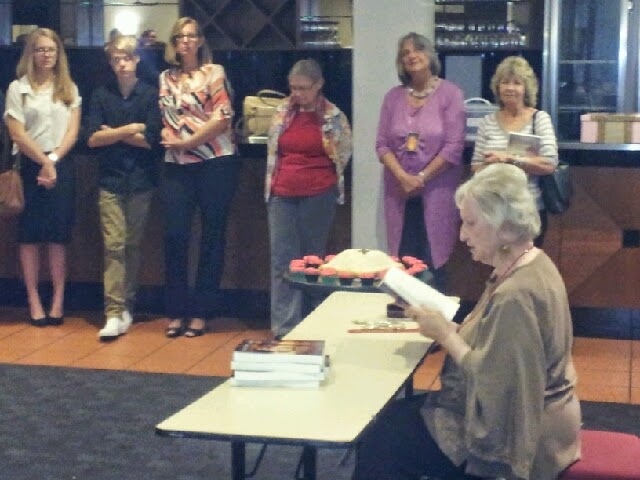 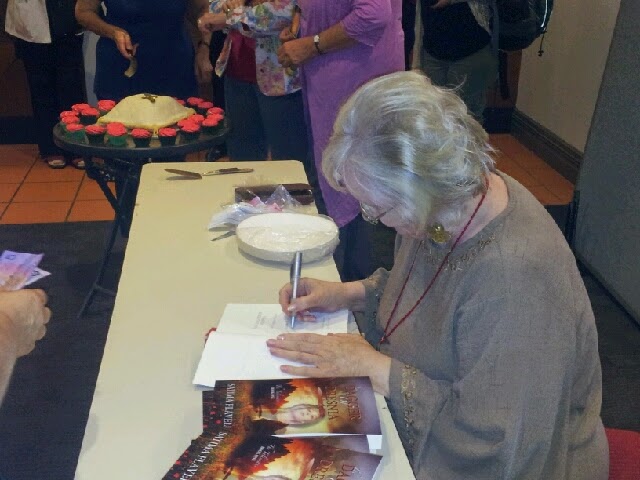 Busy at the signing table 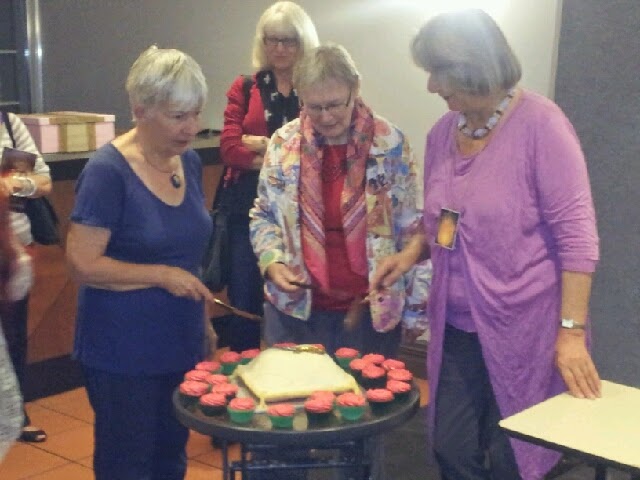 Guest speakers Juliet Mariller, Glenda Larke and Michelle Drouart wonder where to stick the knife, while Carol Ryles stands by and lets them kill her cake.


Rockingham children’s author Teena Raffa-Mulligan has started a new blog, In Their Own Write, dedicated to writing advice and experiences from the mouths of established authors.

In her wisdom, she’s asked me a few questions, and I’ve told the world to milk cows and have sex. And some other stuff. Go here and read my interview, and catch the rest of her line-up here while you’re at it.


THE BOY IS BACK!

Almost a year to the day ago, Master 9 came down with a mysterious illness that caused him to vomit more than 40 times a day. School quickly became impossible. A normal life became just as impossible. Luscious withdrew him, put her life on hold, and set out to home-school him while she and the medical profession set out to determine what was wrong.

A year later, with a diagnosis of Rumination Syndrome under his belt, a year of the hardest emotional work I have ever seen a parent put into a child paid off. His vomiting has diminished to the point where he can go entire days without vomiting, and generally, if he does, it’s once or twice a day at worst. He and Lyn have battled every step of the way: against the illness, against despair; and against a medical fraternity that couldn’t give a shit about doing anything more than convering their own insurance premiums. They’ve never given up, never taken negative advice at face value. Bit by bit they’ve dragged GPs, specialists and surgeons in their wake, and changed both our lifestyle and environment until this week, for the first time in 12 months, this: 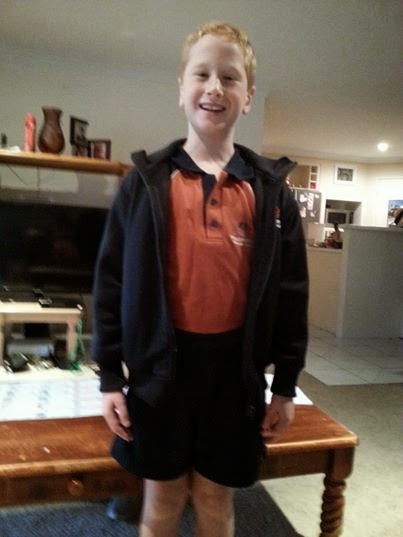 His first day at school in a year. For now he goes back one day a week, under the care of a teacher who is so understanding of his condition she has organised special care and infrastructure to ensure he has a safe space to retreat to should he be unable to stay in class, and coping strategies for when he can. But even one day is a victory, and he’s already talking about how soon that one day can become two, and two become three, and on until he’s back at full time.

I am so proud of them both I can barely find the words.

STUFF YOUR LUFTBALLONS, I HAVE LEGO


A year ago, a chance remark from Luscious prompted me to embark on a scheme of grand stupidity. I would build all of my Lego sets once more, and when they were built, I would photograph them, because reasons, that’s why.

Naturally, that didn’t take into account the umpteen set I would buy over the course of what I dubbed The Great Set Rebuild of 2013, because things go better with 1950s Hollywood titles, so that, eventually, it became the Great Set rebuild of 2014 and, finally, the Is This Frigging Thing Not Over Yet of It’s Never Going to be Bloody Finished.

And yet, here we are. 99 sets, in all. It would have been 100, but for an incomplete set that arrived last week with filthy, unusable parts that I’ve had to source from third parties. However, sets were built, photos were taken, and here, for what it’s worth, you can wallow in the glory that is my Set Rebuilding Fu.

I’ll tell you this for free, though: I can’t wait to get back to building bloody MOCs….. 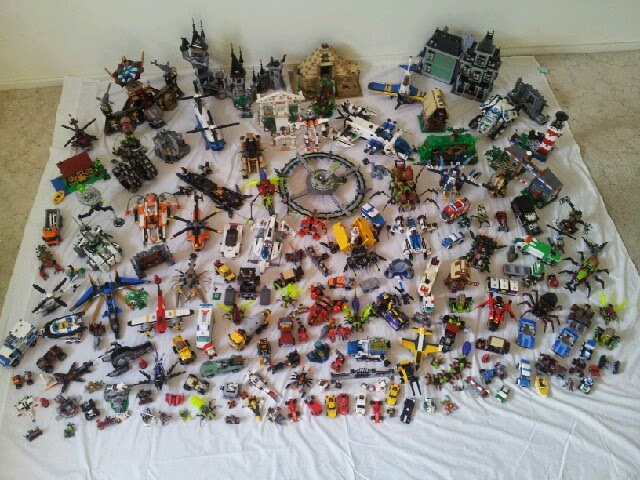 
And theme by theme: 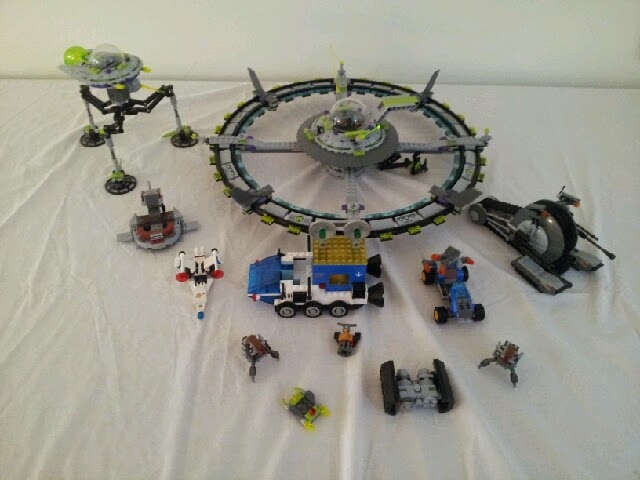 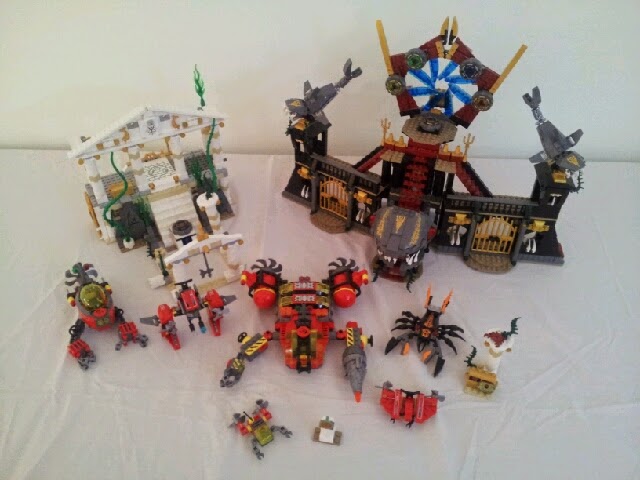 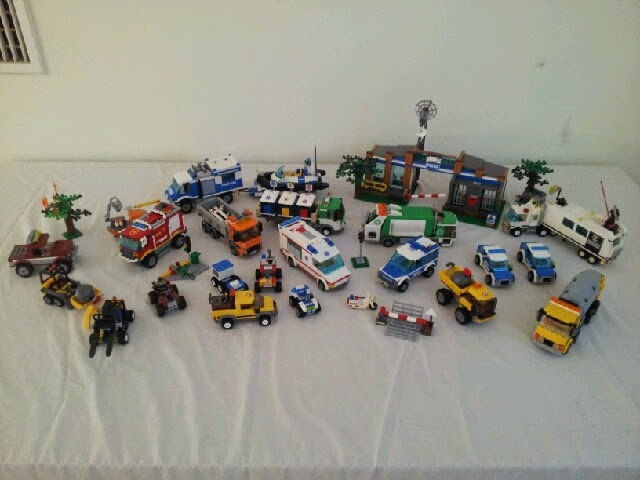 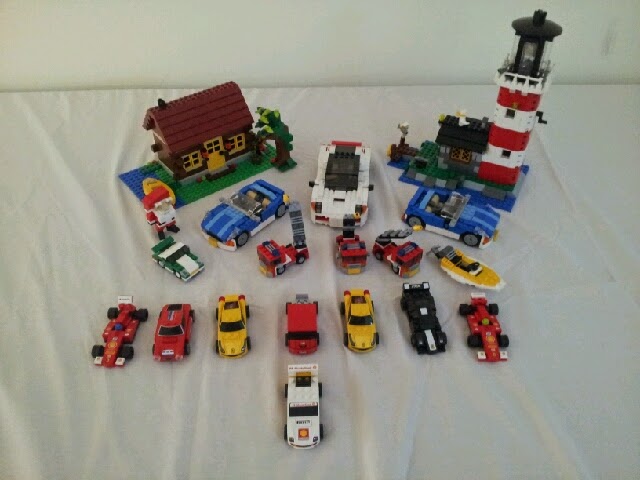 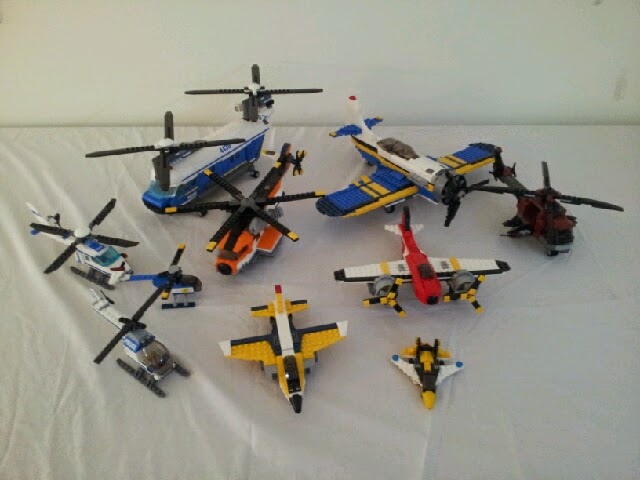 Various themes, all celebrating the power of flight... 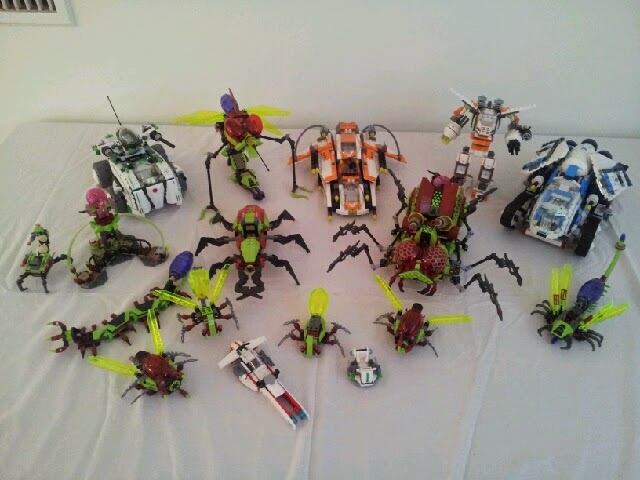 Possibly my favourite of all themes, Galaxy Squad 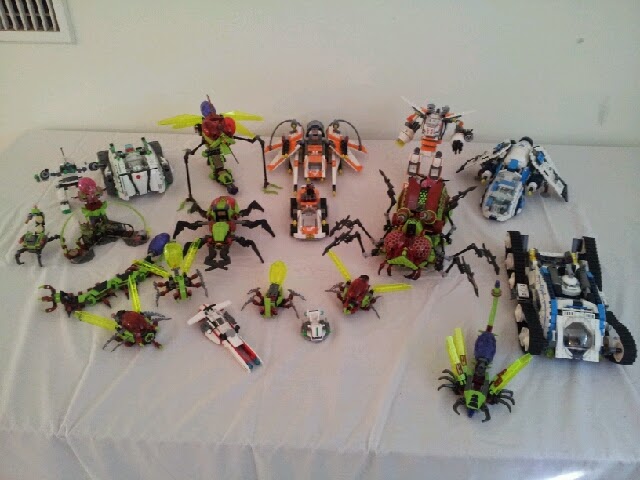 And proving why it's my favourite, each of the sets separated into their playable 'second mode'. 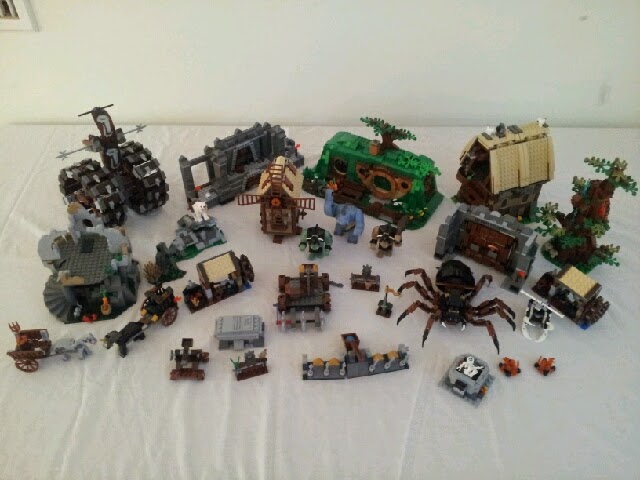 Lord of the Rings, the Hobbit, Kingdoms and Fantasy Era 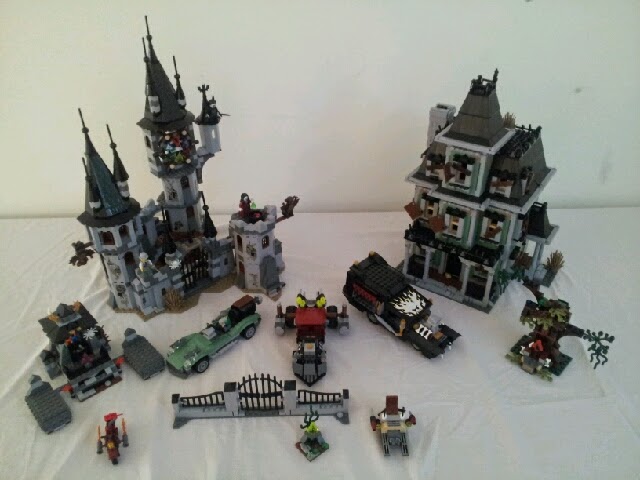 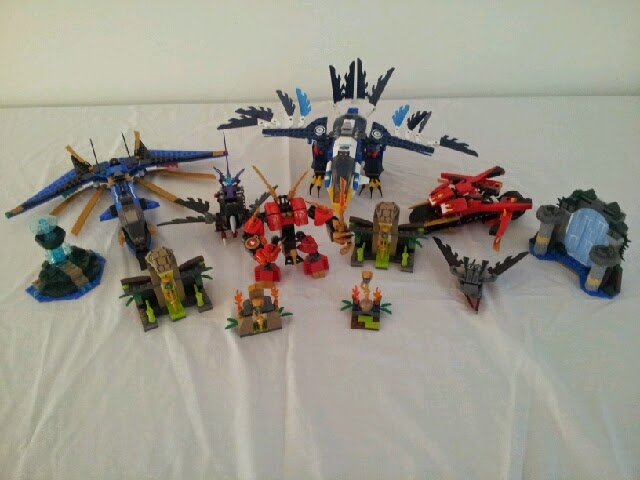 Ninjago, Chima and Pirates of the Caribbean 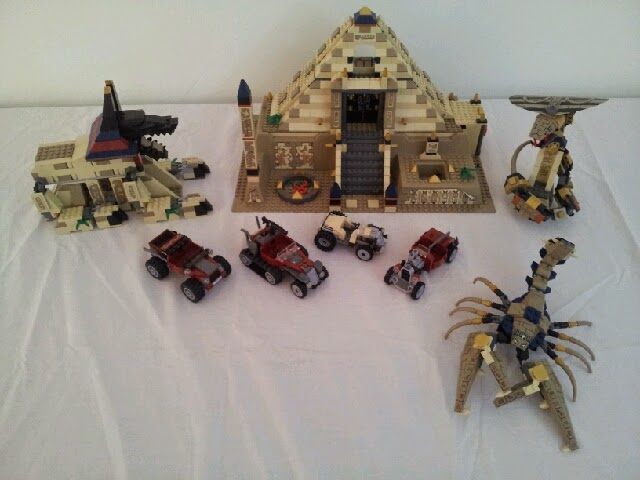 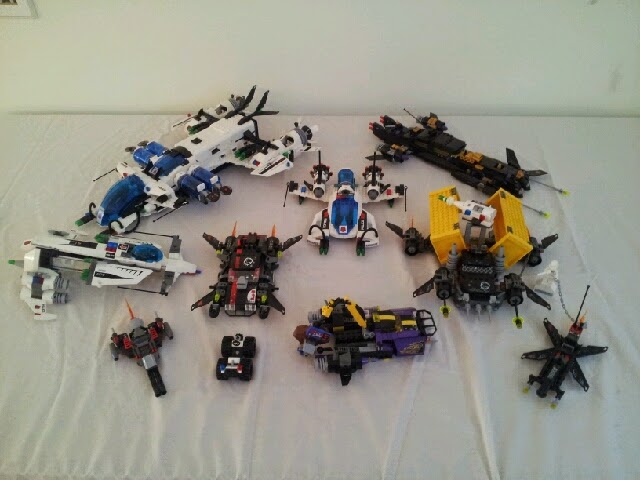 And lastly, proving that themes may come and go, but my love of insane spaceships will never die, Space Police III

Sad news the other day, with the passing of the immensely talented Bob Hoskins, at the age of 71 after a short bout of pneumonia. Hoskins had retired from acting in 2012 after being diagnosed with Parkinson's Disease, but he was one of the most talented, varied actors I've ever had the pleasure of watching, and the film landscape is immeasurably poorer for his passing. A short, tubby, genial-looking bloke, his capacity to play anything from doltish mook (Who Killed Roger Rabbit?) to vicious killer (The Long Good Friday) to sweet romantic lead (Mermaids) and all points in between (The Dunera Boys, Mona Lisa, hell, close your eyes and throw a dart at IMDB and you'll find a brilliant performance in something) placed him at the very top rank of actors, in my opinion. 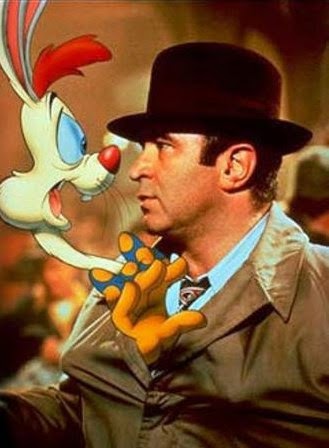 That's a serious amount of Lego you've got there, boy!

A great catch up post. I am also thining of taking a holiday from Facebook so I can finish book two - The Cloak of Challiver. Deadline October. Oh, shit! (Bites nails furiously)

Hugs to the school boy, and his parents. It's been a rough trot.

We are both so very glad that Connor is on the mend! Can't wait to see you guys again!

Great relief to hear about Connor.