DAY OF THE DOCTOR, NIGHT OF THE BATTKIDS

It may have escaped your notice (I assume I have a large readership of blind and deaf orphans who live under rotten tree stumps in the darkest corners of the Congo), but Saturday marked the 50th anniversary of the broadcast of the very first Doctor Who episode, An Unearthly Child.

It also marked 50 years since the last American who wanted to assassinate their President actually managed to shoot straight, Seriously, for a country so obsessed with guns, you think they'd be better at using the bloody things.

We're a tadbit fannish in our house. By which I mean Lyn and I are massive fans but pale into obscurity next to the near-pathological devotion to all things Whovian exhibited by Master 8, who we have voted 'Boy Most Likely to Face Stalking Charges Once He Learns Tom Baker's Postal Address'.

To mark the occasion, we took the kids to the cinema on Sunday night to attend a 3D screening of the 50th anniversary episode, Day of the Doctor. After watching the accompanying minisodes. After spending half the morning watching the The Unearthly Child story. And An Adventure in Space and Time.

I wore one of my Doctor Who t-shirts. Yes, one of. DON'T JUDGE ME! The children wore their knee-high Doctor Who socks. Master 8 wore the Fourth Doctor scarf his Mum had knitted him. Judge them. Judge them cool, for it is so. 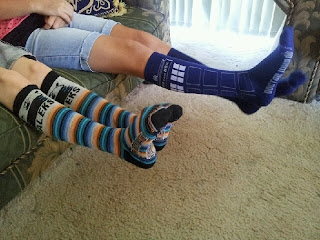 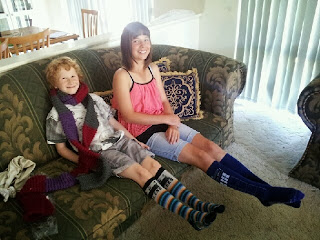 
And we were not the only ones who Who'd-up. From the plethora of t-shirts on display; to the multitudinous rainbow of scarves, (including the family of 4 who came kitted out in matching examples); to the countless fezzes; bow-ties everywhere I looked; even the girl who dressed up in a neck to toe TARDIS dress, complete with shining blue light on top of her head; we were part of a vast crowd, several hundred deep, who had come out to celebrate their tribal membership, to mark an event that will, in all likelihood, not be repeated in my lifetime: there are no other shows that will survive so long, with such a devoted fandom. There may never be. That's the thing about phenomena-- they're rare, and precious.

Which was all well and good, and my children will carry the experience with them for all their days, but was it actually any good? Was it worth $108 to drive an hour from home to sit in a cinema and watch an extended 3D episode of a TV show we could have watched on iview that morning for free?

Yes. It most definitely was.

I'm not going to talk about the story itself, very much, except to say that it is a highly satisfying Doctor Who story. It's scary where it needs to be, funny where it needs to be, and the triumvirate of Smith, Tennant and Hurt have an on-screen chemistry that fairly leaps out of the audience: this is a trio of actors who are thoroughly enjoying their work together, and the way they banter and jibe bespeaks a genuine enjoyment in their work. There are nerdgasm moments in abundance, from (quite literally) the fifth second (Headmaster: I. Chesterton) through the return of a classic, widely-loved monster done properly, to two of the GREATEST. CAMEOS. EVER!!!!!!!! (ahem). And along the way, writer Steven Moffat delivers the type of beautifully constructed, labyrinthine, fan-friendly romps he is capable of when focused on the pure product, untrammelled by production concerns and the need to cram an overarching storyline and multiple 'narrative umbrella' lines into every moment. It is, by turns, wondrous, moving, laugh out loud funny, nostalgic and tearful.

It is, in short, exactly what you want in a celebration. And while the 3D was amazing (used properly, not to layer everything with a film of schlock but to subtly alter the dynamics of select shots, to add astonishing and surprising depth to moments where the impact is truly breathtaking. For those in the know, I return your attention to The Moment's eyes.), and the interaction between the principals was fun and engaging, and the monsters were ubercool and the plot was fun, my favourite moment was so much of a surprise to me that it may have turned me around on the series as a whole:

Clara Oswald, as played by Jenna 'Don't call me Louise anymore now I think I'm getting a bit famous' Coleman is one of the least interesting companions the show has ever presented. A breathy, mile-a-minute perkiness machine with the emotional depth and nuanced performance you'd expect from a four year old jumping in puddles, she has been a source of overwhelming irritation from the moment she first appeared.

Someone sat down with her before they started filming and told her to slow the fuck down. Slow down the delivery. Slow down the reactions. Slow down the perkybouncyrightyhochum performance and let her damn face breathe for a moment before fixing itself in the straight-at-the-camera rictus grin that has been, up until now, her one and only expression. And in Day of the Doctor, at the point of the narrative when all is lost, and three incarnations of the Doctor look each other in the eye and admit that the only option open to them all is the destruction of everything they hold dear, including all their morals, all their beliefs, and all the codes they have carried with them through 1200 years of regenerations, it is Clara who steps forward-- the least worthy and least likeable of companions-- and reaffirms exactly why Doctor Who-- the show and the character-- needs a companion.

And I bought it, completely and without question. Because I've been watching Doctor Who since I was six years old, and I will continue to watch it for the rest of my life, long after it ceases to be screened again (perhaps, as we all have done once already). And I do so because Doctor Who is my fairy tale, my fantasy, my wish fulfilment. Because he falls into death and despair and threat, week after week, and always, always, leaves those he touches wiser, and safer, if not always happier. And always, always, he leaves behind him a trail of companions who have experienced the wonder of travelling with him, and are changed for the infinitely better.

And always-- always-- like every Doctor Who fan I have ever known, I have spent my life with half an ear cocked, waiting for the sound of the arriving TARDIS.

I have bitched and whined about Doctor Who for several years now. Too often 'NuWho' has relied on substandard material, or ploughed the narrative of least resistance. Some of the worst Doctor Who stories I've ever watched-- and I've seen just about everything-- have occurred in the last eight years (Gridlock, anyone?) It has consistently resurrected classic monsters only to ruin whatever legacy of memory they may have carried with them, and while there have been a number of truly brilliant stories, after 8 years I have exhausted most of my remaining goodwill towards the program.

Until last night, when, upon leaving the cinema, I tweeted "I think I may have fallen in love again".

And I think I have.