Unless you're terminally non-observant, or have just ended up here because you accidentally googled "Billie Piper's nipples", (It's true, and no, I don't know why), you'll be aware that one of the careers I came very close to following was drawing single-panel cartoons. (Go on, admit it. You've only just come back after googling "Billie Piper's nipples" to see whether it works, haven't you?). I mean, I've only dedicated about a million Thursdays to posting thumbnails I've scratched out over the years.
Put simply, there came I time where I had to concentrate on either writing or cartooning if I wanted to make a career in the arts, and writing won.

Still, cartooning remains very close to my heart, and if the 18 Month Plan sticks, who knows? I might find the time to invest some real energy into resurrecting that particular dream in the interests of my ongoing artistic diversification. Weirder things have happened.

In the meantime, for those of you who've enjoyed catching up with my half-realised ambitions, here's a list of 5 single panel cartoonists who have influenced not just my cartooning, but my approach to all my artistic material over the years.

Creator of the immortal Addams Family, but that doesn't begin to cover the full spectrum of Addams' dark, ghoulish and gleefully devilish sense of humour. My first glimpse of an Addams cartoon was love at first sight. A prized possession is a pair of CDs containing every panel he drew for The New Yorker, attached to a giant hardcover celebrating that magazine's 75th anniversary. Amongst all my creative heroes, he sits at the very top table. It's not just the darkness that makes me love him, it's the delight. 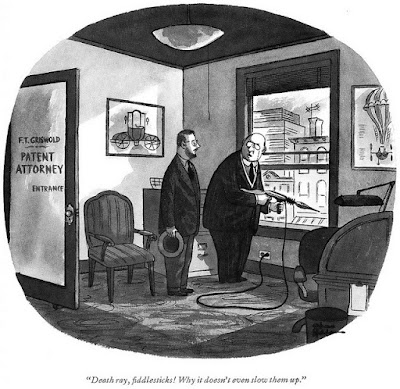 "Death ray, fiddlesticks! Why, it doesn't even slow them up."

Another dark angel with an imagination built for shadows. Where Wilson gives me the giggles is not just the content of his work, but the style: where Addams based his work in a realistic tableau to give his ideas weight, Wilson unfetters the anchors of reality. His grotesqueries are grotesque, delightfully so. To enter his world is to commit to the back side of the mirror. Wilson is Puck de-bowdlerised, full of mischievous glee and murderous jollity. 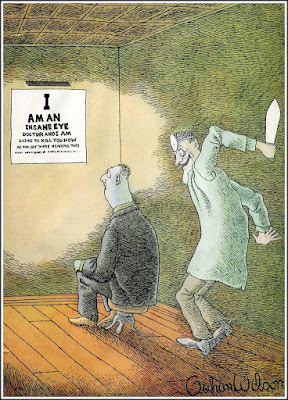 Larson broke into the mainstream consciousness just as I was beginning my artistic journey. For many years he was the Lord of Surreality, the latest avatar of a viewpoint that went back through Dali to Gilbert & Sullivan, to Yeats, to Blake and all those who saw beyond the veil to the true absurdity of the shared consensus. And he's still bloody funny. The Far Side was required reading for my friends and I, and his work still straddles that line of familiar insanity I reach for. Plus: the Thagomizer. Now that's immortality. 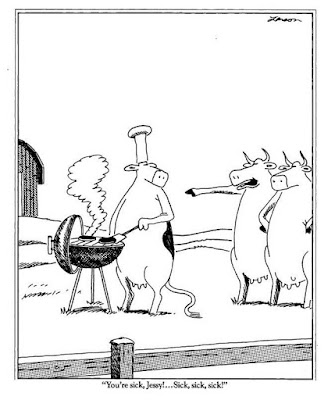 Without Kliban, there is no Larson. Cartooning's great surrealist, he set many of the rules and references that cartoonists are still plumbing today. He was the first to make me realise that it was not so necessary to make sense as it was to hint at a greater, unknowable sense beyond what was seen. He was the first cartoonist I read who really explored the unavoidable schism between the drawn image and the tag line: in many cases, the only thing that connects them is the ability of the reader to make a connection. He disturbs and amuses in equal measure, and in many cases, without the viewer necessarily knowing why. He's hypnotic. 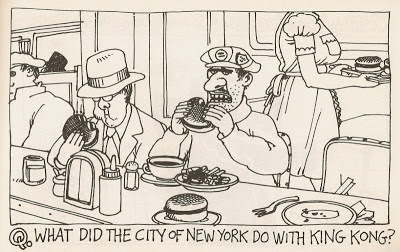 I have loved the cartoons from Punch magazine since I was a kid. Collections are a purchase-on-sight item, and I have uncounted numbers in my bookshelves. And at the centre of my love is Larry: nowhere near as dark as the others on this list, there's a quintessential English whimsy to his work that delights; a sense of ordinary frustrations and bamboozlement at the absurdity of the every day world around him. His 'Rodin' series is legendary, and hilarious. I've loved his elevation of the mundane for over 40 years. 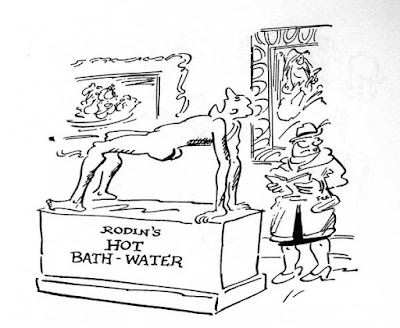