Okay, I'm sick at home, and a whole bunch of my creative friends like this Precious Things ideas, and they've sent me their spiels already. Sooooooooooo...... that's enough of an excuse to pop another one up for our reading pleasure, isn't it? 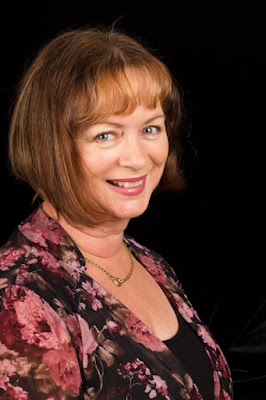 Donna Maree Hanson is a Canberra-based writer of fantasy, science fiction, horror, and under the pseudonym Dani Kristoff, paranormal romance. Her dark fantasy series (which some reviewers have called ‘grim dark’), Dragon Wine, is published by Momentum Books (Pan Macmillan's digital imprint). In April 2015, she was awarded the A. Bertram Chandler Award for ‘Outstanding Achievement in Australian Science Fiction’ for her work in running science fiction conventions, publishing and broader SF community contribution. Donna also writes young adult science fiction, with Rayessa and the Space Pirates and Rae and Essa’s Space Adventures out with Escape Publishing. In 2016, Donna  commenced her PhD candidature researching Feminism in Popular Romance. Her first Indie published book, Argenterra, was publishing in late April 2016. Argenterra is the first in an epic fantasy series (the Silverlands) suitable for adult and young adult readers. You can find out more about Donna at her website, but for now, here is the story of her literary treasure.

This is a hard question. I don’t think I have any from my childhood like Lee does. I read but it wasn’t until I was nineteen that I really started to read again. I’ve always loved science fiction, which at that time was television: Star Trek; UFO; Blake’s 7; etc. In film, it was Star Wars that blew me away. So for books, I started with science fiction mainly. Asimov’s Foundation series took my brain apart and reassembled it, but at the time a lot of the content was over my head but it led me to read more SF that the local library had.

One day, though, a young friend gave me Stephen Donaldson’s Lord Foul’s Bane to read. I was 23 years old. I remember saying to him that I couldn’t get into it. He said just keep reading…and I did. Oh my God! I lived and breathed that book and the rest of the series. It changed how I thought about the world. (Now at that time I hadn’t read Lord of the Rings. Get it! I didn’t know that Donaldson had borrowed extensively from Tolkien.) I went around hugging trees, thinking that world was full of life, and I’d gaze at horse thinking back to Thomas Covenant and meeting the mythical horses and how he could feel them with his senses. 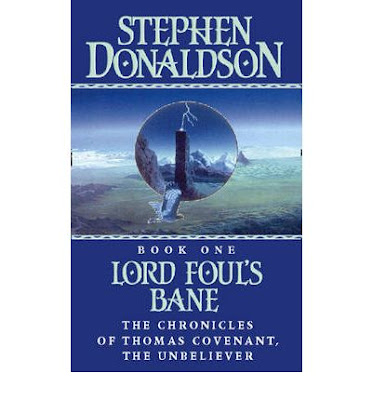 Not only did I read this series, I reread it many times. I had a hard-cover edition of the first trilogy, but sadly I loaned it to someone and didn’t get it back before I left New Zealand. If I could get that again, I would. It would be up there with my literary treasures (as physical books). Right now I have to settle for some old paper back versions.

There was a dearth of fantasy at that time but it turned me into a fantasy reader. In 1986 when I came back to Australia there were more and more books and I was so excited. Julian May’s Saga of the Exiles, and like everyone I know I read David Eddings. But this first trilogy from Donaldson holds the place as the first for me. It rocked my world and changed me and stayed with me. It cemented me as a reader and its influences linger on.

A brief recap on the story:Thomas Covenant is a leper, an angry person. His wife had left him and he’d lost two fingers on his left hand (I think). Then he is magically transferred to the land where he is mistaken as a historical figure. The land heals him of his leprosy. Overwhelmed with feelings and lust he rapes a young girl-- Lena-- a deed which shapes his story in the world. He’s an antihero, probably the first I ever encountered. The world is depicted in exquisite detail and with poetic words and evocative descriptions. Characters that lived for me and that I treasured as almost real. At that time in my life I hadn’t even heard some of those words he used or seen them used in that way. There are evil creatures, minions of Lord Foul, and there are giants, lovely giants. Oh my god! Saltheart Foamfollower! I have loved you forever, and cried and cried when we said goodbye.

I went on to read a lot of Donaldson’s books, but it is his two book duology, Mordant’s Need, that now sits in the most reread books pile. I just have a soft spot for Geraden and Teresa…

I would have to say that Donaldson would have be one of my writing influences because of the effect his writing had on me.

In saying the above, there are so many books that I’ve read and loved and that have been special, but you asked for the most precious, even harder to say, but I chose the first awakening for me. Also, I haven’t really told you about the precious books I own and just like looking at….