AND WHILE WE'RE AT IT

Luscious and I are taking a week to hit Melbourne up during January, which will include a chance for me to get my head in to Brickvention, Melbs' fucknormous Lego display/convention/paloozarama while we're there.

As a way of sneaking into the AFOL day that happens before the public display, I've volunteered to add a spaceport to a community-build Micropolis city. If you're not familiar with Micropolis, the title should give you a bit of a hint-- everything is built to a teensy-tiny scale, on standard 16x16 'modules': four modules together equals a standard 32x32 baseplate. You can learn more here.

With Luscious flying out to attend a weekend of Weight Watcher's coach hobnobbing and general frivolity over the weekend, I surrendered control of the TV to the Brattersbabes and spent Friday night, and the early parts of Saturday morning, having a crack at my first ever micropolis build.

What do you think? 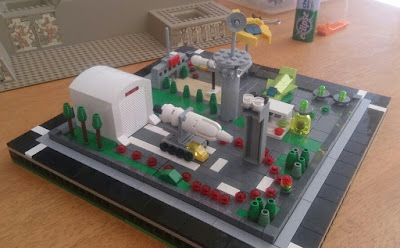 The rocket leaves its hangar and journeys to where two astronauts wait atop the gantry, watched over by the control tower behind. 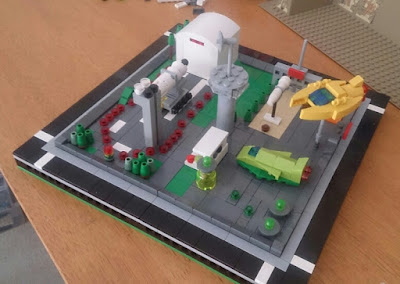 Spaceships arrive for the launch, cruising past the administration building with its memorial statue in front. In the foreground, two aliens leaves their ships and make their way to the viewing platform, while a third gets in a sneaky abduction before the festivities begin. 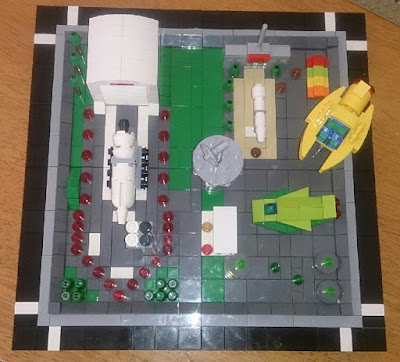 A top view of the whole shebang, showing the cars in the car park, the viewing platform, and the various tiny 1x1 people wandering about.