This week, we welcome author and world's sexiest wife (in my utterly unbiased opinion) Lyn Battersby:


I’m at the Steel Tree café waiting for my muse. As usual, he’s late, which leaves me hugging a glass of tepid water while staring out the windows. The storms of the previous two days have fled and the café is filled with patrons desperate to escape a humidity that hovers somewhere near 90%.

I’ve chosen this café for a reason. For one thing, they provide a free glass of wine with lunch. Right now my muse claims to like wine, so I hope to entice him to our meeting by offering a generous glass of Shiraz. Sometimes this works. He’ll sit back in his chair, sip at grapes raised in Margaret River, or McLaren Vale or the Barossa, and regale me with tales that feature people he’s met living in places he alone has travelled through. Other times, however, the wine fails. My muse becomes surly, purses his lips, scowls at me through slitted eyes.

I try to talk him out of these funks. I beg, I cajole, I reason. I explain my feelings of abandonment, my need to hold him close. Sometimes, however, I try the passive-aggressive approach. I tell him that I would like to see other muses or tell him that I’ve met someone else. It’s no use. My muse has heard it all before. “They are just dalliances, they mean nothing to you. Go ahead, knit a beanie, crochet a scarf, decoupage a bedspread. It won’t last. It never does”

And then, to rub salt into an already inflamed wound, he’ll stand up, wander around and offer up stories to other writers, stories that were meant to be for me.

And he’s right, I do come back, I do offer up fresh enticements, fresh reasons for him to stay. For my muse is a muse of inconstant fetishes. What pleases him today he disdains tomorrow.

I’ve written at specially created writing desks, at the table, on the train and in bed. Despite this, despite my constant desire to meet his desires, my muse remains unmoved. No fetish, new or old, had gone unchallenged.

Once, and I hate to admit this, I tried to bind him to my side with a voodoo doll. He took the doll, told me a story about it and then bit its head off.

And now, I’m sick of it. I haven’t called this meeting today because I want to write. I’ve called it because I want out of this destructive quasi-co-dependent relationship. I want to say ‘It’s not me, it’s you and you’re a jerk.” I want to take the hundreds of thousands of words he’s given me over the years and make him eat them, one by one. I want to make him squirm, just as he’s made me squirm via his throwaway love, his surly moods and his neglect. I want to –

And he looks freaking awesome today. 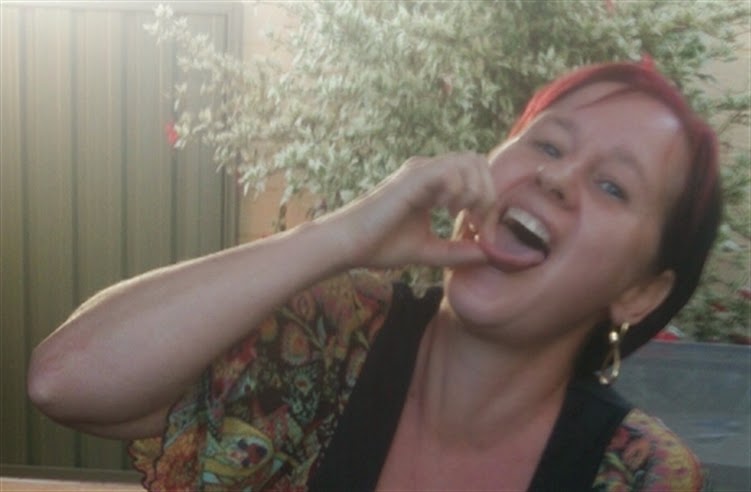 Lyn Battersby’s short stories have appeared in various publications such as Borderlands, Andromeda Spaceways Inflight Magazine and Electric Velocipede. When not studying for her BA in English and Creative Writing, she can be found concocting new recipes with her slow cooker. She lives in Baldivis with her beloved husband, Lee and two of their five children. She does not like cats. She does like time-travel.

Are you a creative artist? Fancy joining in and letting us know about that special item, object, location or cosmic state of being at the heart of your creative process? There's always room for another lunatic in the asylum: email me and make your most excited Horshack noise.
Posted by Unknown at 7:00 am

The cat lovers who love her, can forgive her for not loving cats. ;)