A RETURN TO WORK

Two weeks into 2014, and the only reasonable response to life is to build a blanket fort. 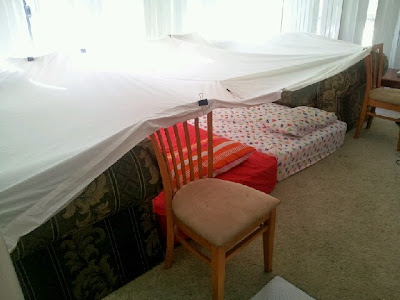 Watch for the parade. But it's okay, they have the proper permits.


This last weekend has been the hottest I've experienced in a number of years. Saturday night was, apparently, the hottest night Perth has ever recorded. Naturally, our air-conditioner has shat itself and died already-- thanks to the fucktarded cowboy air conditioner repairmen who couldn't even fulfil their job description last year-- so we've resorted to living at the swimming pool, walking around with ceiling fans strapped to our heads, and this: you can't see it, but there are three fans inside this bad boy, and the kids slept like, well, kids in close proximity to fans in an enclosed space. Still, as far as family projects go, this was a fun one.

On the personal front, ten days break over Christmas gave me the opportunity to engage in daily exercise for the first time since the last time I had ten consecutive days off, which is going back more than a year or two. Thankfully, I've managed to maintain the habit since returning to the day job, and I'm seeing the benefits of it. Since December 24 I've lost 3.2 kilograms. I've still got somewhere in the region of 18 to go before I'm in sight of my optimum weight, but that's at least 3.2 that I don't have to lose again.

I've been walking laps of our suburban block, playing basketball with the kids every Thursday night, and have hit the pool on several occasions to walk laps and build up my core strength by throwing children around. Cool drink had been dispensed with in favour of water-- although Ginger ale and Lime made an appearance over the weekend as we tried to keep cool-- and biscuit & sweeties based snacks have been discarded in favour of lashings of fruit. Nothing revolutionary, just actual changes, all at once.

And writing work has borne fruit: over the Christmas break I completed the text of a picture book entitled I Watch Monsters, and have sent it in to a publisher. It was the first-- and, admittedly, smallest-- of my writing goals for the year, but it's still nice to have one scratched off this early in the piece.

So, here we are. Lyn and I are determined to achieve a much more positive year than 2013, and we're both working hard to achieve the goals we've set out. Up next for me: completing the submission package for Father Muerte & the Divine and pushing the 15 000 words of Cirque up towards a full manuscript.