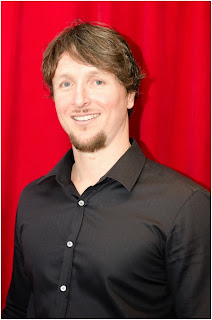 Jonathan Benton left Auckland University before completing a BA in English Literature and History because of a burning desire to see the world. A qualified PADI Dive-master, he spent a year working in Fiji. Then he moved to England, where he rambled the countryside for several years chasing myths and legends. Before returning to New Zealand, he stopped off in Australia; twelve years later, he is still here. Jonathan likes adventure. He has driven from Sydney to the tip of Cape York with a homemade plywood boat, which his friends then sailed across the Torres Strait. He has sailed from Sydney to Forster/Tuncurry and back, and has spent time in the Northern Territory researching factual details for a forthcoming novel. The youngest of three siblings, Jonathan likes arts and entertainment, sports and leisure, and all the other categories on the Trivial Pursuit board.

I interviewed Jonathan about his new novel, A Wicked Kind of Dark.

Robert Duncan no longer believes in magic. A mysterious call about a blood moon, however, leads him back to the magical world of his childhood and to Luthien, the beautiful girl with flame-coloured hair, whom he loved and lost. As Robert unravels the secrets of his childhood, darkness enters his life and an ancient evil awakens. To have any chance of defeating the dark forces that would destroy two worlds, Robert must find Luthien before the rise of the blood moon. He must, once more, believe in magic. A Wicked Kind of Dark mixes vast and spectacular fantasy landscapes with gritty urban reality. A must-read for people of all ages who believe in the power of imagination, and the importance of never losing touch with your inner child. 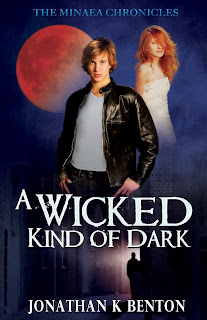 A Wicked Kind of Dark seems focused on the theme of duality: two worlds, two possible futures, two directions in which your hero Robert Duncan can travel. How important is this idea of duality to you as a writer?

Duality highlights the importance of choice, something I’m extremely passionate about having dealt with addiction. Sometimes people, like the character Robert in A Wicked Kind of Dark, feel there is no choice. There’s always a choice. We simply need to be shown.

The figure of Luthien seems to embody a sense of loss and the chance to recover lost things.

We all experience traumatic events like the loss of a loved one. It’s unrealistic to believe these events don’t stay with us. Developing tools to overcome adversity helps build a pathway to long-term happiness. Robert must learn this important lesson if he is to have any chance of regaining what he has lost.

How important was it for you to imbue the fae world of Minaea with a believable, logical magic system? Is it necessary, in your opinion, for the rules of magic to make sense in our non-magical world?

If a fantasy world is not comprehensible, then it won’t flourish outside the author’s imagination. This is something all fantasy writers must consider.

You've blogged about your decision-making process when it came to creating your antagonist, the dark fae lord Jakal. How difficult is it to create an antagonist with sympathetic motivations? Is it easier to create someone whose motivations are simply the 180 degree opposite of the hero, or should there be at least some small sense of identification for the reader?

It depends on the story. The creature ‘It’ in Stephen King’s book of the same name is a wonderful antagonist that has no sympathetic motivations whatsoever. The book would be weakened if ‘It’ was a tortured soul doing bad things for the right reasons. Pure evil still has a place in literature. While there are suggestions in A Wicked Kind of Dark that Jakal has sympathetic motivations, the book focuses on Robert beating his internal demons, so that he can defeat the ‘real’ ones.  And the real ones ain’t nice!

The image of the blood moon is the initiating trigger for the narrative of the novel. How important is symbolism to you as an author? Do you use symbols consciously, or is it something that comes out of the writing process?

Symbolism is a powerful literary tool – often subtle, always poetic, and inevitably thought-provoking. I love the moods an effective symbol creates. The moon, for example, is naturally mysterious. A blood moon takes that mystery and adds a dash of darkness and foreboding. This is intentional.

What should readers expect from A Wicked Kind of Dark? Give me your best PT Barnum pitch! :)

A Wicked Kind of Dark celebrates the power of the imagination, using explosions of high fantasy in an otherwise familiar urban setting to reinforce this theme. As 17-year-old Robert Duncan reconnects with his childhood, his perception of London changes from a grey, lifeless city to a city full of magic and miracles.  Literary fantasy novels like A Wicked Kind of Dark treat words as preciously as the plot. While the book is written for young adults (11 to 15-year-olds), adults who loved Enid Blyton, Tolkien, C S Lewis and J M Barrie will enjoy my classical writing style.

Are there any future stories in the Minaea Chronicles on the drawing board? If so, what can readers expect?

The feedback I’m getting is that readers love the high fantasy world in A Wicked Kind of Dark – Minaea is conceptually strong and people want to know more about it. My next book will introduce a new set of characters based in Australia (not the UK this time) and Minaea. The first draft is complete. I’ve always planned to do it this way. It keeps things fresh. Too often I see undercooked sequels because nothing new has been added to the mix.


A Wicked Kind of Dark is available now via Odyssey Books.