I was observing the kids playing with their Lego collection recently, and noticed that, while Erin 11 has begun to extend her imagination by engaging in connected free builds-- creating large scale structures by consistently adding to each one each time she sits down to build-- 8 year old Connor contents himself with rummaging around in the minifig box and playing story telling games with the figs. 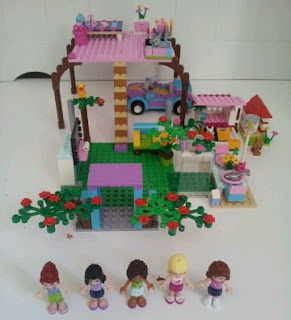 
Nothing wrong with that-- after all, Lego is a toy, not a psychological determinator, and there's really no wrong way to play with it other than the "Let's see how many pieces we can shove up the dog's nose" game-- but I asked him why he doesn't play with the bricks, and he replied that there's too much Lego and he didn't know where to start.  The kids have approximately 10 000 bricks, and I didn't realise until he told me that the sheer bulk was just too much for the little guy. He'd never had a chance to learn small scale building techniques before being overwhelmed by the giant pile in front of him, and had no idea where to begin building a base, or frame, or even how to start experimenting with creating shapes. He took one look at that great big mountain of plastic and retreated to  a scale he could deal with: little people, and telling himself stories.

The set I chose was one he'd had a ball building from the instructions, a small mecha called Kai's Fire Robot: Ninja Mecha. Because Lego is all about peace and love and togetherness...


And to test the concept, in a bout of insomnia last night, I had a crack at it myself. So, here's my proof of concept, for your entertainment. I present the Imperial Rocket Ice Sled, and the Frog Throne of the Ugly Prince: 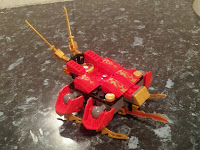 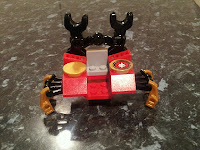 Now to play with the Young Master, and see what he comes up with.

They look a bit like insects, but sadly they're inedible.

That's one of the cool things about the Ninjago sets-- some of the sets do look the slightest bot insectoid.

Of course, the new Galaxy Patrol sets take that to extremes...