Yeah, I realise it's been a week since this wonderful convention ended, but I made some notes, and well, it's be a shame to waste them, so:

Saturday morning started beautifully for us, although it took some time to swing me out of a monstrous depression that was threatening the occasion. We met talented Canberra writer Matthew Farrer in town for breakfast and he presented us with a copy of his novel Junktion, which cheered me up immensely: the company of talented people bearing booty has that effect... :)

Saturday was notable for being the first convention day in over three years where I was not on a single panel. In fact, I was only due to be on one panel for the entire convention, apart from saying a few words in defence of Chuck McKenzie at the launch of his book Confessions of a Pod Person on Sunday. As it was, I was quickly dragged out of the crowd to play a part in the 1st panel of the day: Iron Writer! or to give it it's proper name Irwon Writerooohaaaaaaahhhhhh!!!!! Along with Messrs Farrer & Livings, I was set a haiku. The subject: rabbits, and hysteria. Here, for posterity and to show that Sean Williams is not the only man around to get in touch with his innermost soul in 17 syllables, is the result:
Bouncing cotton ball
Unseen combine harvester
The empty warren
(Sniff). Oh, the art....... 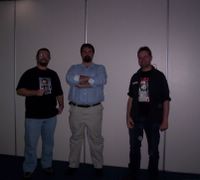 After a chaotic yum cha lunch at which Luscious and Chuck discovered a sexual chemistry so awe-inspiring it had the rest of us reaching for squid legs with which to relieve ourselves (Well, they got on really well, and I just wanted to give you that visual image.....)... 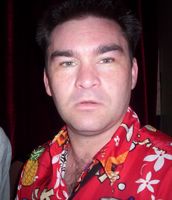 Me Tarzan, you squid leg?
...I had the pleasure of sharing a panel with Luscious, Martin Livings, Stephanie Gunn and Shane Jirayia Cummings for the launch of Shadow Box, the uber-sexy flash-horror anthology mentioned in an earlier post this week. 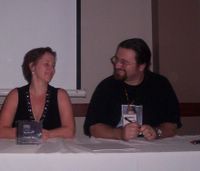 Guess what I'm touching your leg with.....
Lyn is due to appear in issue 9 of Shadowed Realms, their special 'redback' all-women's issue, and to commemorate the occasion, they presented her with a little friend...

No need for you tonight, Battboy...
The day was wrapped up by dinner with Matthew, and it was an enormous pleasure to spend a civilised dinner with an articulate and passionate writer after a day of performing monkey boy servitude. It was the most relaxed I'd been at a Con in some time, and for once we didn't stay at the hotel, so it was a good feeling to be in my own bed at the end of the evening. Of course, I knew that in part two I'd have to get the monkey boy suit on for my panel......
Posted by Unknown at 7:32 pm